Frederic Sellier: Hi Marina, can you introduce you to our French readers?

Frederic Sellier: When and how did you learn chess?

Marina Brunello: My brother Sabino taught me to play chess when I was 5. 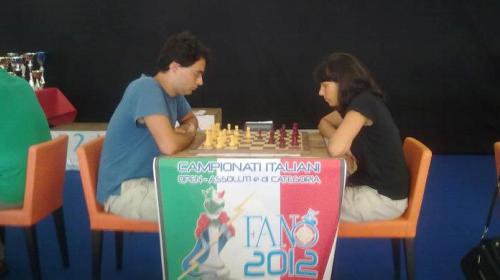 Marina playing against her brother Sabino in the recent rapid tournament

Frederic Sellier: What was your journey so far?

Marina Brunello: I achieved the WIM title in December 2009. I participated in three Chess Olympiads: Turin 2006, Dresden 2008 and Khanty-Mansiysk 2010. I obtained my first IM norm in May last year. Right now I am the 3rd best Italian woman and world number 13 amongst U18 girls.

Frederic Sellier: What is the best memory of you as Chess Player?

Marina Brunello: I have many good memories. Surely one of them is my first win against a GM, but also when I achieved my IM norm or when I’ve played in Olympiad.

Frederic Sellier: How many hours daily you devote to chess study and how would you best define your chess style?

Marina Brunello: I study every day, about 1 hour. Sometimes more, other time less, it depends on my homework. I like attacking chess.

Marina Brunello: Shirov, for his style.

Frederic Sellier: What is your main character trait? 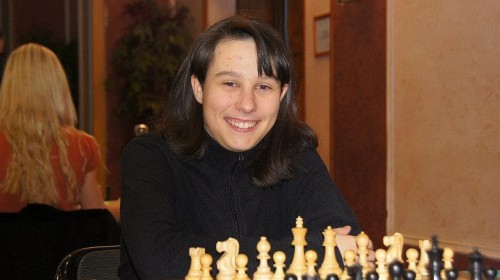 Frederic Sellier: And your principal defect?

Marina Brunello: Well, this is a tricky question!

Frederic Sellier: Do you have another hobby?

Marina Brunello: Generally I like all sports. At school I’m always happy to play volleyball, basketball or football, even if I don’t play in any team.

Frederic Sellier: What are your future challenges in the short and medium term?

Marina Brunello: I would like to achieve the IM title and to become the woman number 1 in Italy. But obviously it will take hard work!

See also the video interview with Marina and Sabino Brunello