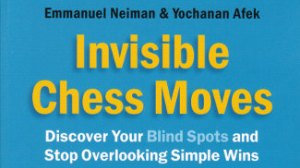 After several weeks of voting, one book stood out as the runaway winner. In previous years the voting has been close round-by-round, or one book will do well in the first round, but falter in the second. This year, players from three countries (France, Israel, and The Netherlands) rallied around just one title:

Invisible Chess Moves has been voted the ChessCafe.com 2011 Book of the Year. Congratulations to authors Yochanan Afek and Emmanuel Neiman, along with publisher New In Chess.

Emmanuel Neiman is a FIDE master. He teaches chess in his home country France and he has written books on chess tactics and chess training.

Yochanan Afek is an Israeli International Master who lives in Holland. He is an organizer, a journalist and a trainer, but probably best known as an endgame study composer. This is his third book on chess.