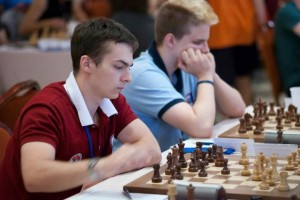 The winners of last year’s World Junior Championships for men and women faced each other at the last round of the Reykjavik Open.

Turkish GM Alexander Ipatov defeated Women’s Junior World Champion WGM Guo Qi in 50 moves. The Chinese played a Queen’s Gambit Declined and Ipatov decided to give up the bishop pair in exchange of the initiative. The rooks endgame was slightly complicated and the Turkish star demonstrated that he is very well prepared in this part of the game.

With this result, Alexander Ipatov finished on 7/10, winning a few rating points. Guo Qi stayed on 6/10, but also got some extra rating points. She had two remarkable games in this tournament: she drew with GM Gawain Jones and defeated GM Yuriy Kuzubov.