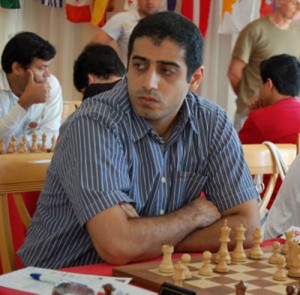 The Corsica Masters was going on perfectly in the first rounds of the competition – with a superb prize fund, happy participants, and record participation. Everything on the boards was going fine with strong battles and sportsmanship. The in the beginning of round 4, a 0-1 appeared in the match GM Ghaem Maghami – FM Ehud Shachar.

Something was obviously wrong there, with the higher rated GM not even making the first move. Was it an accident, was it the flu? No, it was the refusal of GM Ghaem Maghami to sit and play against a player from Israel.

In the Gens Una Sumus spirit, the organizer of the competition Mr. Leo Battesti, decided to remove all possibility of political conflicts on the board and excluded GM Ghaem Maghami from the event.

All games from the Corsica Masters live with computer analysis at the Chessdom/Chessbomb arena.

GM Ghaem Maghami’s rivalry with Israel is well known, but so far it has been in the spirit of the chess game. The two countries have a challenge over a World Chess Simultaneous record, which the Iran Grandmaster upgraded earlier this year. He faced more than 600 players in over 25 hours of simul. Of the total 614 games, Maghami won 590, lost eight and drew 16, walking a total distance of 55 kilometers as he moved from opponent to opponent.

The race between Iran and Israel began in August 2010. Morteza Mahjoob (Iran) set the record in 500 games, after improving the Guiness achievement of GM Kiril Georgiev. This record was short lived, as the Israeli grandmaster, Alik Gershon, set a new one in October, playing 523 people over 19 hours, beating 454, losing 11 and drawing 58.

GM Ghaem Maghami is the Iran chess champion for 2011, 2010, and holds a total of nine Iranian National Championships. GM Ghaem Maghami is winner of this year’s Dubai Blitz, the local events 10th Avicenna International and Ayandehsazan Cup, won against the ex World Champion Anatoly Karpov in a match, and more international opens.

The words of the organizers

Leo Battesti explains: “The Iranian Grand Master Ehsan Maghami Gahem informed me of his refusal to play against his opponent of the fourth round, the Israeli Fide Master Ehud Shachar.

I told Mr. Ghaem Maghami that as an organizer of a sporting International competition, I could not accede to his request to change the pairings, for him to play against another player.

The presence of five Israeli players in this tournament is known by all participants since Saturday, October 22. It honors our competition as well as the presence of Iranian players and about thirty other nationalities.

The motto of our Federation is Gens una sumus, we develop in Corsica awareness of the positive aspects of chess sport on our youth, being complicity of any form of segregation would be unworthy, and in total contradiction with the foundations of our sport action.

So regretfully I have to exclude the player who unfortunately has persisted in his choice, inspite of my imprecations. I regret it. But I could not escape from our responsibilities.”

Here is the video explanation of the organizers: