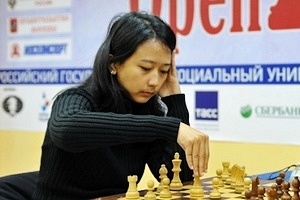 The leader of the Student-Grandmasters’ Cup of RSSU in Memoriam of Alexander Pochinok came to Moscow from the distant Indonesia. After her 2nd win Irene Kharisma Sukandar kindly agreed to give a short interview to our correspondent.

Q: Irene, please tell us what happened in you first and second games.

A: In the first game I was a bit lucky. Actually I knew my opponent is very strong but yesterday she didn’t play her best. Since the 14th move I was already much better and managed to win easily after that.

The second round was pretty hard. I chose a wrong move order in the opening and after that I was just trying to defend my position, because it was clearly better for my opponent. I’ve just tried to equalize it and I succeeded. In the equal position I tried to exploit more advantage and finally I managed to do it. We reached a rook endgame where she made some positional mistakes. And after that it was pretty easy for me to get a passed pawn, and then I’ve just advanced all my pawns and won.

Q: You have a good start. Is it your first time at Moscow Open?

A: Yes. Actually this is my second time in Russia: before I played at the Olympiad in Khanty-Mansiysk.

Q: What do you think about the Russian capital and the festival?

A: Moscow has always been my must-visit city because I travel quite a lot but I’ve never been here before.

So I decided to come here. I know and I can see it now that chess in Moscow has a very good atmosphere, everyone plays chess here. It’s a bit cold nowadays (laughing) but I like winter, so it’s not a problem for me.

Q: What is the situation with chess in your country?

A: I cannot say that chess is popular in Indonesia, but still many people play it. Sure it’s not as popular as in Russia or any other ex-Soviet country. Chess doesn’t come into school, into school curriculum. It’s studied in the form of extra activity, but it’s not obligatory.

We do have chess schools, chess clubs but still: comparing with Russia we have nothing.

Q: Do you have chess activities in universities, like here in RSSU?

A: Yes, we do, especially in Gunadarma University where I study. That’s why I’m playing in the student’s tournament, by the way.

Q: Are there Russian chess coaches in Indonesia?

A: Actually I’ve been working with foreign trainers since I was 13 years old and several of them are Russians. For example, I worked with Ruslan Scherbakov.

Q: Are you one of the strongest players in your country?

A: In female chess I am, in male chess I think I can be at top 10. In men’s section for the last decade Indonesia hasn’t been really improving so much, but our women chess players are really good. Maybe it’s a great sign for Indonesian chess future.