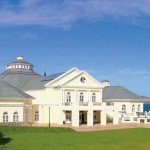 It’s that time again – the Chess.com Isle of Man Chess International starts on 20 October 2018 at the Villa Marina, Douglas, and runs for nine days up to 28 October. Once again the line-up is going to be incredible…

… with a couple of exceptions. Last year you will recall one of the key face-offs was between Magnus Carlsen and Fabiano Caruana in the penultimate round. This year these two young gentlemen will be meeting elsewhere in the British Isles to decide the little matter of the world chess championship title. That match starts on 9 November, just 12 days after hostilities end in Douglas and precluded their prior appearance on our small but perfectly formed island in the Irish Sea. Caruana had provisionally entered the 2018 Isle of Man event but he must ultimately have realised it would have been too much to take on with less than a fortnight to his date with destiny in London.

But even without Magnus and Fabi the line-up in Douglas will be awesome. Caruana was replaced by another big name, Anish Giri, swiftly followed by the entry of Alexander Grischuk. So let’s take a look at the top ten in rating order: Ding Liren (China), Levon Aronian (Armenia), Maxime Vachier-Lagrave (France), Anish Giri (Netherlands), Vladimir Kramnik (Russia), Wesley So (USA), Viswanathan Anand (India), Alexander Grischuk (Russia), Hikaru Nakamura (USA), Sergey Karjakin (Russia). How does that strike you? Not bad, is it? And it doesn’t stop there as there are a further 11 players rated 2700+ up behind them and many other big names including former world title challengers Boris Gelfand, Peter Leko and Nigel Short, and UK number one and 2018 British champion Mickey Adams.

Of course, as all chess tournament connoisseurs will realise, a long list of big-name players doesn’t necessarily translate into decisive results on the board and spectator appeal, but this is an open tournament so the big names will have to do battle with lower rated opponents who can deliver a surprise or two. Who can forget last year when long-retired GM Jim Tarjan surprised himself as well as the rest of us by downing Vladimir Kramnik? That was just one of many David versus Goliath successes to savour, and you can be sure there will be plenty more such upsets this year.

Given the importance of maximising your score in Swiss events in order to go after the big money – £50,000 is the first prize in 2018 – top players also realise that they have to attack each other with rather more venom than they are accustomed to in closed elite events. No doubt people will recall last year’s innovative random first-round draw when Caruana and Kramnik found themselves facing each other in the first round, and a full-blooded game resulted in favour of the American. Unfortunately, the killjoys at FIDE subsequently decided this innovation was too much like fun and have since changed their regulations so that future tournaments using random pairings can no longer offer norm opportunities, so we will have to wait a few rounds before witnessing super-GM-on-super-GM action this year, I’m afraid. We’ll have to be patient but sooner or later we should get to see some mighty clashes.

One other major feature of this tournament which closed elite tournament can’t deliver is the sight of the stars of the future in action. If the pairings pan out well, we can hope to see them getting their first shot at elite players. Two Indian players, Nihal Sarin and Rameshbabu Praggnanandhaa, were amongst the talented youngsters who caught the eye at last year’s tournament and they are back in 2018 with their shiny new GM titles. Sarin is 52nd in the pecking order, while Pragg is 57th, but you can be fairly sure that they will posing a major challenge to those ranked above them at this year’s tournament.

There are plenty of other young players to look out for this year. Here’s a sample of them. Amongst those already sporting a 2700+ rating is Vladislav Artemiev of Russia, whom we have to remind ourselves has only just turned 20. Jeffery Xiong and Samuel Sevian, both in the vanguard of the USA’s growth in chess strength, are already rated in the mid-2650s and will still be only 17 when they play in the Isle of Man. Aryan Tari, the 2017 world junior champion and the most notable product of the Carlsen boom in Norway, is 19. He ranks 39th on the Isle of Man starting grid. Semyon Lomasov, 16, of Russia is another world champion, having taken the under 14 title in 2016. He doesn’t have his GM title yet but it can only be a matter of time as he is rated well in excess of 2500 and with a first place in February’s very strong Moscow Open under his belt.

German IM Vincent Keymer won’t be 14 until November but two years ago he attracted the notice of Garry Kasparov who referred to him as “exceptional”. This spring he confirmed the legendary world champion’s judgement when he won the Grenke Open ahead of 49 GMs with a score that was 1½ in excess of the GM norm and a performance rated at 2798. Spanish IM Lance Henderson de la Fuente, whose parents are from the USA and Spain, is 15 and he made his mark at the 2018 Gibraltar International, achieving a GM norm with a remarkable 7/10 score, with wins against four GMs.

The women’s prize fund is also generous, with the first prize set at £7,000, guaranteeing a strong line-up. However, as with the open world championship, this year there is a calendar clash with the women’s world championship knock-out competition starting in Khanty-Mansiysk, Siberia, on 2 November, less than a week after the Isle of Man tournament ends. Even so the line-up of female names is impressive: Former world champion Alexandra Kosteniuk leads the list, followed by Elisabeth Paehtz (Germany) and Nino Batsiashvili (Georgia), who gave Hou Yifan a good for her money in 2017. Pia Cramling may be a little further back these days in terms of rating but she remains a formidable contender and as strong as ever, recording an excellent unbeaten 6½/10 to take the prestigious top women’s prize in Gibraltar earlier this year. Alina Kashlinskaya of Russia is another top woman player to look out for. Her husband Radoslaw Wojtaszek will be playing alongside her, guaranteeing some top-class pre-game preparation. Jovanka Houska and Tania Sachdev, of England and India respectively, are part of the commentary and broadcasting team in Gibraltar, but they will be playing in this year’s Isle of Man International.

Hopefully that will have whetted your appetite for what is going to be another great tournament to watch online. I should add that it is too late to enter yourself as entries have long since closed at 174 names. Another 70 or so players take part in the Major and Minor events held alongside.