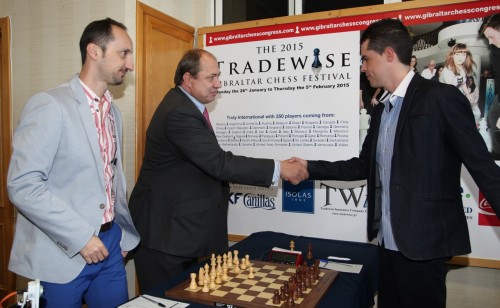 Tradewise Chairman James Humphreys makes the first move for World No. 4, Veselin Topalov, and the top seeded player at the 13th edition of the Tradewise Chess Festival (courtesy of Sophie Triay)

The First Move of the 2015 Tradewise Gibraltar Chess Festival at The Gibraltar Masters tournament took place this afternoon at the Caleta Hotel.

At precisely 3pm (Gibraltar time) James Humphreys, Chairman of Tradewise Gibraltar Insurance Ltd, the main sponsor of this event made the first move on the top board against top seeded player, and World No. 4, Veselin Topalov. 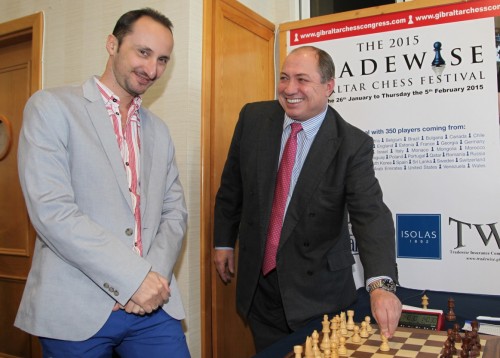 Tradewise Chairman James Humphreys makes the first move for World No. 4, Veselin Topalov, and the top seeded player at the 13th edition of the Tradewise Chess Festival. Pic: Sophie Triay.

In his First Round game Topalov is playing against one of the many Spanish players in this festival FM Emilio Miguel Sanchez Jerez  with a rating of 2282. Topalov’s rating stands at 2800.

James Humphreys,  whose company has been sponsoring the game for 10 years, was pleased to be back again at the start of the tournament  and that his company was giving it its full support as the main sponsor.

Moments later the 252 chess players in The Masters from some 60 countries made their opening moves in the tournament which is being held over the next 10 days over 10 rounds. 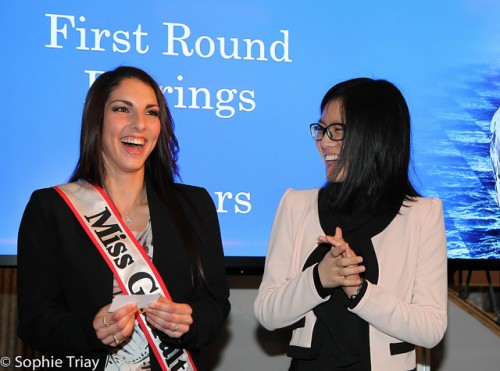 The reigning Women’s World Chess Champion Hou Yifan from China says she is very happy to be back in Gibraltar.

“I am lucky to be back here to such a lucky place for me. With the lovely weather and lovely people,” she said ahead of the start of the Gibraltar Masters tournament which has started this afternoon in a sunny Gibraltar.

Hou Yifan is the top woman player at this year’s 2015 Tradewise Chess Festival. She is the youngest ever to win the title of Women’s World Chess Champion as well as the youngest female player ever to qualify for the title of Grandmaster.

In this tournament she is ranked 13th and in her first round today she is playing against FM Dr. Hans-Joerg Cordes.

She has just arrived directly from Wijk aan Zee in Holland where she took part in the highly prestigious Tata Steel Masters. In a field which included world champion Magnus Carlsen and several of his highly ranked rivals, Hou finished 11th with a score of 5/13. Her participation in the world’s strongest closed tournament, immediately followed by her participation here in the world’s strongest open tournament, is testament to her stamina and ambition.

Last time she played in Gibraltar she was nearing 18. That year, 2012, she almost upset the apple cart at the 10th edition of the festival after a close encounter with England’s Nigel Short when both finished on 8/10 after the final round. Nigel then went on to win the play-off.

In 2015 Hou Yifan, who turns 21 next month, hopes to show her best performance on the Rock.

“In my last visit I had a fantastic result and I am not forcing myself to do even better this year but of course I want to do my best and look for some good performances. In my last tournament my performance was not that good but maybe here I can get back on form and produce some interesting games,” she said. 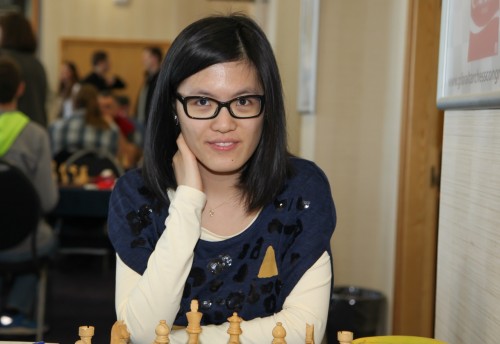 Although being Women’s World Chess Champion is important to her she says it is just a title.

“But it does mean something because it proves you are one of the best players in the world. But now I want to concentrate on my chess rating and chess quality and overall standing for this Open tournament.”