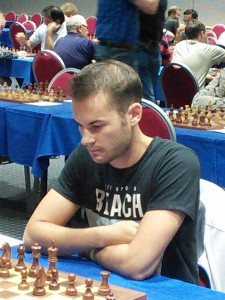 Marian Petrov First of all, congratulations for conquering the Croatian title, that comes right after your European one!

Ivan Saric I’m happy that I’ve managed to win the Croatian championship. But honestly, I’m not happy with my play in almost half of the games there! Yet, from 2009 I was always in top 3 and I was either winning the championships or I was half point short, and this is a good achievement. The competition is very difficult, every year someone else also has a good tournament and it’s almost impossible to win the championship convincingly.

MP What was your most difficult game?

IS Probably round 9 with Jovanovic, when I completely missed the move to keep an initiative and ended up in a defending position with a clear pawn down. At some point it seemed hopeless, but my opponent wasn’t precise and I managed to save the game.

IS My ambition was to qualify to the World cup (reach a score of +4), but I’m not the guy who makes draws when he has +4, so I knew that everything is possible. Each victory makes a huge difference, +5 sometimes is a medal. After 4-5 rounds I felt that this could be my tournament finally, but then I got the cold shower in next 3 games, and I wasn’t so ambitious anymore. Somewhere during the opening phase in game with Navara I realized I could win this tournament. Of course this is my biggest achievement of my career so far.

IS I do not follow all games of TCEC, maybe if someone tells me there is some spectacular game to check, but Stockfish is the best one in my opinion, even if it doesn’t win the event every time.

MPHow do you prepare for the tournaments and how many hours per day you study chess?

IS It’s hard to say how many hours per day I work, because I’m not counting them :) I work until it’s interesting and until I have energy. Last couple of years I’ve basically worked alone. I had some training sessions and sparing with my friends but that’s all. When I have more time between the tournaments I usually do regular physical training or some running

MP How do you choose your tournaments?

IS I play 2-3 official events per year, couple of leagues, and this leaves place for not many opens. I choose those events with either excellent conditions or excellent prizes, and sometimes both. I’m not 2750 so I can’t get invitation for strong round robin tournaments.

In summer I usually play more and this year is no exception. I will play 2 open tournaments, 2 foreign leagues and Croatian league, which finishes one week before the Olympiad, so my preparation will be in practical form.

MP Did you expect Caruana to win the Candidates and can he defeat his opponent in the Carlsen – Caruana 2018 match?

ISAlmost anyone from those 8 players could have won the Candidates, and it’s no surprise that Fabiano won. After all, he is the player with best tournament result in history of chess (St. Louis 2014). So far in their encounters there were lot of decisive games, and I believe Caruana has better chances against Carlsen than his predecessors. Still, Magnus is a favorite.