Share
Tweet
Share
Share
Email
Comments
Javier Ochoa De Echaguen, FIDE Vice-President and Chairman of the Appeals Committee for the Grand Prix in Khanty-Mansiysk, has kindly accepted the invitation to speak to the press.

– Javier, you’ve been to Russia before, what are your impressions about Khanty-Mansiysk?

– Yes, I have already been here before, I visited Khanty-Mansiysk for the Chess Olympiad. This city is very small and cute. There’s a lot of similarity about the city, its population and chess culture with Linares in Spain.

– You are watching the games here in the classroom, what do you think about this facility, Ugra? 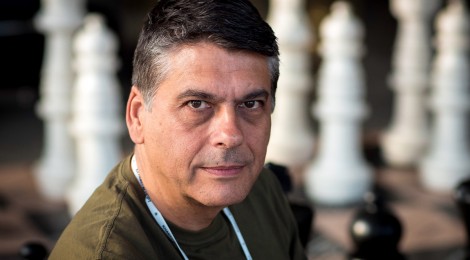 – You are also a strong player yourself, what do you think about the games in the tournament?

– I am an International Master but I cannot compare with the players that are participating in the tournament. But I am enjoying the games very much. I find them very interesting but I can’t say that I understand everything. Today there were some very interesting openings.

– Last year you were appointed to FIDE Presidential Board, as a FIDE Vice-President. You already participated in some meetings. How’s the work looking from the inside?

– Well, we approved a lot of proposals from the FIDE Commissions and other bodies. But at the moment I have only been to two meetings: in Sochi and in Chengdu.

– What are your expectations for the future? Maybe Spain will become more active?

– Well, Spain was very active for many years and it is very active now. But unfortunately, some high level tournaments were cancelled because of the economical crisis. But I hope that we will resume them in the future.

– Vladimir Barsky: How did the Spanish Chess Federation vote in the FIDE elections in Tromso?

– We voted for Kirsan Ilyumzhinov.

– Simply because we thought that Ilyumzhinov is a better candidate with a better team.

– Goran Urosevic: And not because of that personal attack by Kasparov in Spanish newspaper?

– You know about this? (laughing) But no, that was not the reason. It was the decision of the Spanish Chess Federation Board, and not my personal. We considered all the aspects of both candidates and took the decision.

– Vladimir Barsky: Can you say more about the “Chess in School” program in Spain?

– In February this year a motion was approved in the Spanish Parliament and it was decided that chess should be promoted to children during their education. But the situation in my country is particular. This is because Spain is divided into 19 regions and educational competences have been transferred to them and they have to take their decisions independently. So the work is to convince the authorities of all 19 regions of Spain. But we are optimistic about this. It will not be a very long work; this will take a year or two to speak with everyone. We are already working in this direction.

– Anna Volkova: There is a discussion about including chess in the program of Winter Olympics as the program of Summer Olympics is too tight. However,the Olympic Charter clearly states that winter sports must be “practiced on snow or ice.” What is your opinion? Which Olympic Games are more preferable for chess – Summer of Winter?

– Well, it is easier to enter the Winter Games. But in my personal opinion, to be honest I don’t understand why chess is not already included into the Olympics. Chess is played in more than 180 countries. The tradition is hundreds of years long. I hope that one day we will see this happen.

– Goran Urosevic: What is the position of the Spanish Olympic Committee in this regard?

– Well, I don’t really know their opinion. Our Chess Federation is member of the Olympic Committee in Spain but I am not sure if national Olympic Committees have opinions that differ from the main position of IOC. I don’t know what kind of influence they have. But you are right, maybe we should speak to them about this.