The longest game of TCEC Season 2 so far was played today in Stage 1 Round 3 of the leading global computer chess championship by Martin Thoresen. The engines Jonny (ELO 2784) and Onno (ELO 2837) battled for 235 moves.

The game started well for Onno as it gained space advantage on the queenside. By move 43 all light pieces were exchanged and the game entered in the “Kotov phase”, one of the prerequisites for record long games.

At move 87 Jonny’s evaluation jumped to +2,56. Many thought Jonny could be seeing the right way to victory, but for 35 moves the evaluation did not change, nor the character of the position. (Replay the game here , can you find a win for Jonny?)

Onno itself was not convinced it can hold the game and its evals jumped up to +1,42 or +1,30 at times. However, it defended well and step by step discouraged Jonny. The engines were close to a 50 move rule draw, when they deviated for a threefold repetition to “shake hands” for draw at move 235.

The Jonny – Onno game was the longest so far this season, but it is still far from the record levels of TCEC. All avid fans remember the 361 moves between Shredder-Houdini 1.5a. 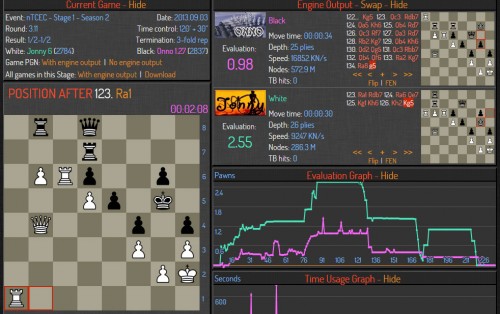