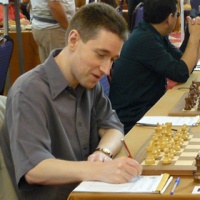 The 98th Championships of the British Isles were organised by the English Chess Federation from 24th July to 6th August at the International Sports Centre, Sheaf Street, Sheffield.

As many as 24 various events, including Senior, Junior and Sections Championships, Major, Weekend and Rapid Opens, were held in that time frame.

Michael Adams claims the second national title in succession, but only after the additional match. In the main event Adams finished on the same points as Nigel Short and then won the two-game rapid play-off which took place immediately after the prizegiving. Adams also wins the English Championship and holds the Tony Miles Trophy for one year.