Ju Wenjun is one of the leading chess players of China. She has participated in many FIDE Grand Prix, finishing second many times. She has won the latest FIDE Women’s Grand Prix in Tehran. She is an International Grandmaster, member of the national Chinese team, having won three Olympiads and three World Team Championships in this composition.

ACF Media: Wenjun, nice to see you here again. My first question is how do you like it in Abu Dhabi at the Asian Nations Cup?

Wenjun: I like it here very much. The accommodation and playing conditions are on a high level. This is my third time in the Emirates and I enjoy playing here.

ACF Media: As far as I know you participated in one of the FIDE Women’s Grand Prix in Sharjah, right?

Wenjun: First time I visited the Emirates for the Dubai Open. Next time I came here to participate in the FIDE Women’s Grand Prix. And yes, this is my third time. 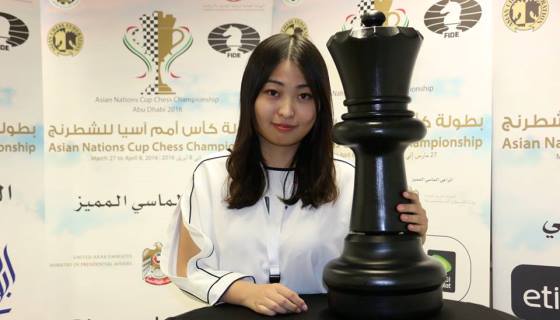 ACF Media: My congratulations on your victory in the latest FIDE Women’s Grand Prix in Tehran. Can you tell us how this tournament went on for you?

Wenjun: I had 7.5 points out of 11 rounds. I was very lucky to win it. It was a very strong tournament with Humpy Koneru and Nana Dzagnidze participating. Other players were also strong enough to make a tournament a real competition. I would also mention Sarasadat who was a strong competitor not only to me during the tournament. She became second in the competition.

ACF Media: Since China is presented with such strong team compositions both in men’s and women’s division, you consider it very important event, right?

Wenjun: The Asian Nations Cup is very important competition for Asian chess players. One should also underline that other Asian countries came with their best chess players. It is good experience for all of us.

ACF Media: There are so many strong chess players in your country. To your mind, what is the chess phenomenon of China?

Wenjun: I guess nowadays every parent would like their children to choose an interesting sport to be busy with. So, apart from having chess in schools, we have many good chess schools as well. Kids can easily attend them and get a chess knowledge there. So, they are fascinated by the game, as we were also when we started playing.

ACF Media: Yes, since then you have gained a lot of success. How many hours per day you spend for chess?

Wenjun: Well, to say the truth, I don’t spend a lot of time for chess. Ok, before an important tournament, as before this competition for instance, I used to spend like four hours per day. But usually I spend less than that (smiling).

ACF Media: What were your expectations before coming to Abu Dhabi?

Wenjun: As for me, just to play as good as I can. As for the team, we want to win this competition, if it works well.

ACF Media: Whom do you think your strongest opponents?

Wenjun: I think they are many. India, Mongolia, Iran, Vietnam, Kazakhstan.

ACF Media: Wenjun, when you got to know that your compatriot Hou Yifan became the World Women’s Champion for another time, what feelings did you have.

Wenjun: This is not the first time she won this title. I think she is a strong player indeed. She deserves this victory.

ACF Media: Are you friends? Do you meet sometimes for training camps maybe?

Wenjun: Yes, of course we know each other. We meet from time to time in China.

ACF Media: What are your future plans? Are you planning to start preparations for the up-coming Chess Olympiad?

ACF Media: Thank you so much, Wenjun, for your answers. Wish you good luck and hope to see you here again.