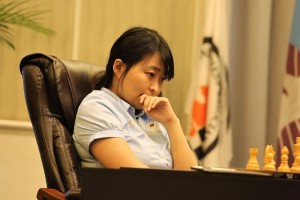 The tenth game of the Women’s World Chess Championship Match finished with a draw and with the final score 4.5-5.5.the challenger Ju Wenjun became the new Women’s World Champion.
After the 9th game， Ju Wenjun has got the match point, she needed a draw to win the match. It was a difficult task for the current champion Tan Zhongyi, to win with black was the only way to bring the match to tie-break.
Ju Wenjun played white today, she started with 1.d4, Tan Zhongyi reacted with 1…g6 and the game went to Pirc defence. She wanted to complicate the game and to avoid the opening preparation. Ju Wenjun played solid and keep small advantage. In the middle game, Tan Zhongyi played 19…g5 trying to fight in the king side. However it looks a little bit premature. That didn’t scare Ju Wenjun, she reacted to it actively. Quickly she had a pawn up, and got total control on the board.
As she needed a draw Ju Wenjun’s last moves were quite solid trying to avoid any complication. In the end, after 4hours 10 minute, Ju Wenjun was with advantage, but accepted Tan Zhongyi’s draw offer to end the game. 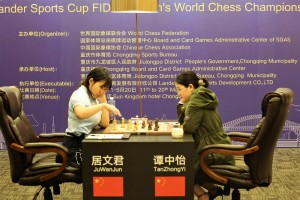 At the post game conference, the two players analyzed the game. In both their opinion, 19…g5 was a dubious move, but Tan Zhongyi said that she had to fight to win due to the score situation, so she had no choice but give it a go. Mr. Ye Jiangchuan, the coach of Chinese national team, attended today’s conference, in his opinion, g5 was moved in a wrong time, 19…Nf6 could be a better choice back to that time, and then black can wait for better opportunities. Ju Wenjun said it was a task for her when after 19…g5, whether go 20.h4 to make the position complicated or not to, eventually she decided to accept the fight with 20.h4. And at the end, she knew she was with big advantage, but draw was enough for her to win this championship match, so she accepted Tan Zhongyi’s draw suggestion.

In the following interview section, both players expressed their gratitude to their team, their hometown leaders, friends, family and fans. Ju Wenjun gave her special thanks to her coach GM Ni Hua for so much support, Tan Zhongyi said her coach GM Zhou Weiqi worked harder then her from the match preparation until the end. Even though she didn’t win, she is looking forward for future cooperation. She had not too much regret for the last game, she thought the main problem was that she played terrible in the second and third games in Shanghai. Because psychological and mentally for both it was very tough, she prefers the knockout system for the World championship.
Ju Wenjun said, that being a chess player, she preffered so just focus and play, not to think about winning or losing before this championship. And she of course is happy with the victory. The most difficult moment was 7th game. Because after 6 hours fierce battle in 6th game, it took her too much physical effort, and then she lost, so she was in a really bad mood too. So the 7th game is extremely hard. The good thing is that she adjusted the state of mind in time.
Mr. Ye Jiangchuan says, it was a fierce competition. 10 games, is a competion of chess skills, psychology and other skills. Ju Wenjun showed us her strong ability of controlling; she was leading all the time. Tan Zhongyi never gave up, she always fought hard. Anyway, Congratulations to Ju Wenjun. Apart from that, he understands the stress, but it is a big honour to participate in this event. Hope that the two girls can keep working hard.

After then it was relaxed question section, When Ju Wenjun was asked, why she was never seen with make up during the mach, and never changed her dress , she usually loves to dress pretty in normal day. She said, when she does make up, she does it carefully, but was nervous during the match, so decided not to. And about the clothes, because the clothesare from the sponsor, She believes she should wear it, so she wore it. Everyday’s cloth looks the same because she has two sets. Tan Zhongyi says she loves wearing lipstick everyday.
So now, the winner of 2018 FIDE women’s world chess championship match has born. After 10 games, Ju Wenjun 5.5: 4.5 Tan Zhongyi becomes the 17th champion of FIDE women’s world chess. Also she is the 6th Chinese female chess player who reached FIDE chess champion. According to rule, she will get the winning prize, 120,000 Euros (After tax), it is approximately 900,000RMB. Tan Zhongy will get prize of 80,000 Euros (After tax).

Tomorrow we will have the closing ceremony.
Report and photos Gu Xiaobing