The reigning king rang the bell in the fourth round, waking up a 2014 U.S. Championship that had seen just four decisions across 18 games. Kamsky’s solid win with white over Sergey Erenberg set a rousing theme to Sunday, with four of the day’s six fighting games finishing with full points.

Also winning was Alex Onischuk, who has collected 2.5 points in a tie for third with Kamsky; as well as Timur Gareev (3/4), who turned in his second consecutive win to hold clear second.

And Aleksandr Lenderman (3.5/4) continued to set pace as tournament frontrunner with his third win of the tournament, after capitalizing on a Ray Robson middlegame mistake.

The U.S. Women’s Championship field enjoyed its first of three rest days on Mother’s Day, set to resume Monday for a potential day of separation: tournament leaders Irina Krush and Anna Zatonskih, with 2.5 points across 3 rounds, match up against Camilla Baginskaite and Viktoria Ni, who lag with just a half-point each. 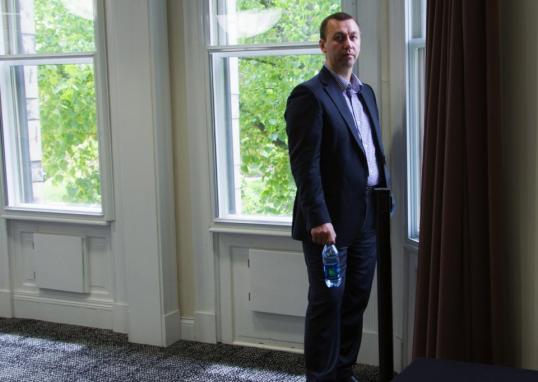 Kamsky came with intent against Erenberg, featuring a 2. Bg5 Trompowsky attack looking to throw down the gloves for a fight without preparation.

“I decided on (Trompowsky) probably a half an hour before the game,” Kamsky said. “I looked at some lines and realized there’s nothing much going on – but its middlegame position, you can exchange a lot of pieces, so there’s a lot of play.”

Indeed, Kamsky treaded water through the opening, seemingly beckoning Erenberg to take a hasty initiative. It came at 17…f5 and Kamsky was quick to convert, first lodging a passer on the e-file at 20. dxe5, then building a tomb around the black king with a nail at 25. b6. By 29. Rde1, white’s rook battery was dominating the central file, with impending threats of back-rank checkmate. Erenberg resigned after 34. Rc7.

Lenderman may have received a few gifts from his opponents to earn the lead in the tournament’s earlygoing, but to the 24-year-old’s credit he has fully capitalized on each opportunity handed to him. Sunday’s match against Ray Robson was no exception. 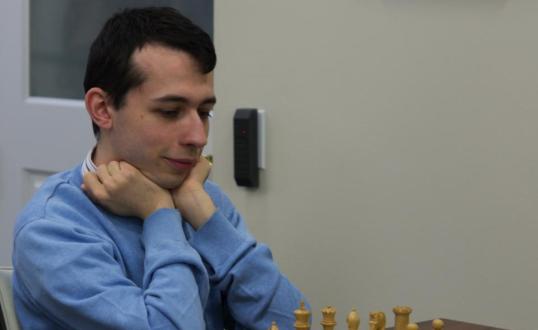 Robson as black should have been happy with the outcome of his Grunfeld opening, with good diagonals of attack for both bishops and his pair of knights harassing the queenside wing. His exchange sacrifice at 15…Rxe3 looked to set off fireworks, but they were short-lived – his 17…Nxd5 was a wet blanket.

“I could have taken on e4, but it’s not really what I wanted,” Robson said. “It just looked like white could be better there, though maybe that was the best option. Taking on d5, maybe it was bad, but it did introduce some complications. I thought Alex played pretty well, and I probably didn’t have any chances after that.”

True, Robson’s army was reeling after after the misstep, as Lenderman quickly cracked open the center to win a pawn with tempo at 20. Bxf7+. His 29. Nxg6+ set off a tactically rich attack on Robson’s castle, and the endgame featured the march of white’s connected passers with a nifty trick to promotion after 50. Rg8+, though Robson resigned before getting a chance to see it.

In an earlier round this weekend, Sam Shankland put his head down and raced through a line only to later discover he had not taken the time to lean on his advantage. By the time he picked his head up to look around after sprinting out against Alex Onischuk on Sunday, he was already losing.

Shankland’s Slav ran right through the book until his 17…Bg6 derailed the theory train, followed by another weakening move in 18…h6 that pushed a critical moment. Onischuk ignored the attack on his bishop, instead capturing a knight at d7 and later collecting the dangling black pawn at 24. Rxg5. 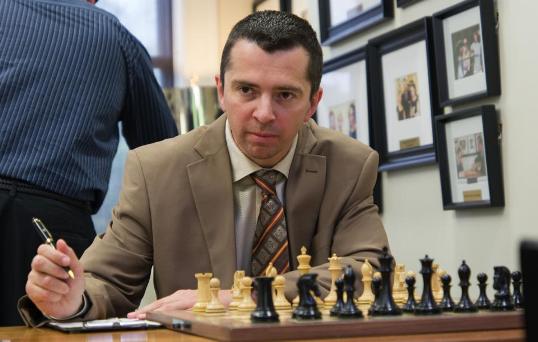 It left the white pieces hovering around Shankland’s castled king and opened up a bevy of attacks on the black pawns, including 26. Bxe6 to pick up a piece and a later 29. e6 to force the issue.

“I think (Shankland’s) opening choice to go for this endgame was mistaken,” Onischuk said. “He can either draw or lose, but he has no chances to win. It’s a very comfortable position for me – maybe not much, but I’m bracing just a little bit. And in fact, he made a mistake with his bishop and maybe h6 is just losing.”

After two draws not necessarily in the script – a first-round quickdraw with Kamsky, and a late endgame misstep in the second round that allowed Lenderman to sneak away with a half point – Gareev put together his second solid win on Sunday by waiting out Mac Molner in a 68-move marathon.

Gareev responded to Molner’s 1. e4 with the Schliemann Gambit in the Ruy Lopez, a successful choice that earned him several open lanes and good mobility. The game hung forever in balance, with a long-winded middlegame that featured much probing by the knights and a slow build-up toward a pawn break – 14 of them still remained on the board after 60 moves.

The climactic breakthrough finally came after 62…d5, a decision well past the time control and pressing on Molner’s draining clock. After a long line of quality moves between both grandmasters, time pressure finally cracked Molner at 65. Kf2 and even worse with 68. Kg3. Gareev’s 68…Nxc3 delivered the killshot, though Molner’s clock expired shortly afterward.

For a complete replay of all the games, click here.