Sergey Karjakin and Pavel Eljanov returned today to the playing hall at the Fairmont Flame Towers in Baku to decide the FIDE World Cup finalist and Candidates Tournament qualifier. After the games with the classical time control the result was even.

In the first set of the rapid games Eljanov opened the score with a beautiful victory with the white pieces. Being in a must-win situation, Karjakin didn’t panic, but slowly increased the positional pressure until the opponent’s defences collapsed and the result was tied once again. 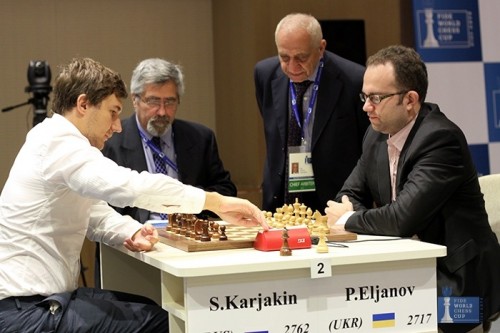 In the next set of the rapid games with faster time control Eljanov again played white pieces in the first game. The opening was similar to what they already had earlier today, and white obtained some positional edge. The Ukrainian kept pressing for a win, but suddenly a careless pawn advance proved to be fatal for him as black immediately turned the tables and won a whole host of pawns. Karjakin brought the victory home and took the lead in the match.

In the return game Eljanov was in must-win position while playing black pieces. His opening choice was smart, giving away the pair of bishops in exchange for immobilized white’s pawn structure.

After some fine maneuvering black seized the advantage and soon white setup started breaking under the pressure. Eljanov won three pawns and white position was in shatters. 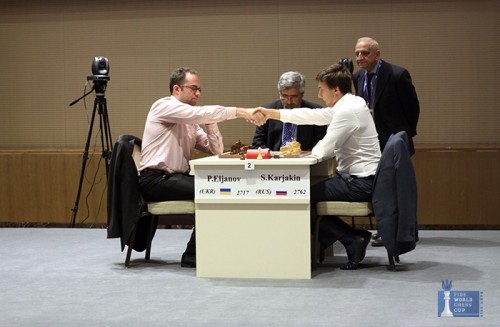 But Karjakin put up an inspired effort, hoping to find a counterplay with the queen and opposite-colored bishop.

At some point during the massive exchanges Eljanov probably missed an opportunity to create a second passed pawn in the ending with opposite-colored bishops. Karjakin blocked the black’s only passer and held firm against the attempts of creating another.

Eljanov tried to triangulate with the king, but in doing so he allowed the opponent to claim a threefold repetition. After a brief game reconstruction the arbiters declared a draw. 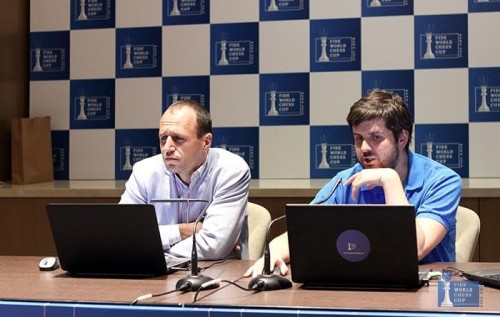 Sergey Karjakin qualified for the World Cup final where he will play against his compatriot Peter Svidler. Karjakin also joined Svidler in the 2016 FIDE Candidates Tournament.

Photo gallery is available at http://www.bakuworldcup2015.com/product/74 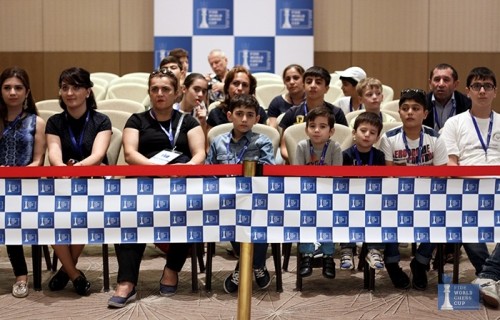