The third round of the Norway Chess tournament was played today in Stavanger. Sergey Karjakin kept his perfect score and opened the gap with his closest followers – he is now a whole point ahead. Viswanathan Anand obtained an important victory over his rival from the 2010 World Championship match, Veselin Topalov. The Indian is now sharing the second place with Levon Aronian.

Russia’s main hope for the future, Sergey Karjakin, is having the perfect start at the first super-tournament to be staged in Norway. He obtained his third consecutive victory over Wang Hao in today’s round. If we add his victory at the blitz tournament, this is clearly the dream start for anyone.

Karjakin opened with his favorite 1.e4 and Wang Hao responded with the Sicilian. The Russian used Fischer’s favorite move in this opening, Bc4, and the fight for the central squares immediately began. The position got simplified a little bit and the queens were exchanged on move 24. Karjakin had a space advantage and the bishop pair. When, on move 39, the Russian centralized his pieces ideally and it was clear that all that was left was a long suffering, Wang Hao decided to give up and signed his second defeat in three rounds. 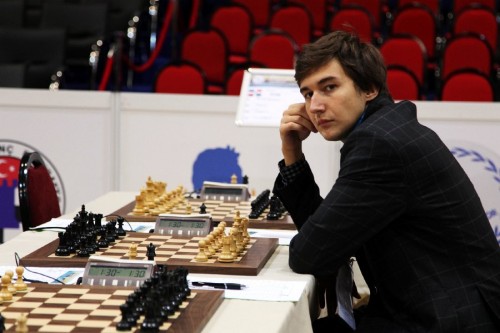 Probably the most expected fight of the day was the one that faced two old rivals, Viswanathan Anand with white and Veselin Topalov with black. The players demonstrated that they were ready to fight and did not shy away from playing a sharp Sicilian. In the early middlegame, Anand used the typical kingside expansion while Topalov looked for counterplay in the center and queenside.

The struggle saw Anand handling his pieces better and this eventually led to a clearly inferior pawn structure for black. This advantage soon converted into material superiority, but Topalov was not going to give up that easily. The Bulgarian, true to his style, looked for counterplay and it seemed like he stirred enough complications to save himself. However, Anand showed good nerves and got an important edge around the time control. The players signed the score-sheets with the result favoring the Indian on move 41. 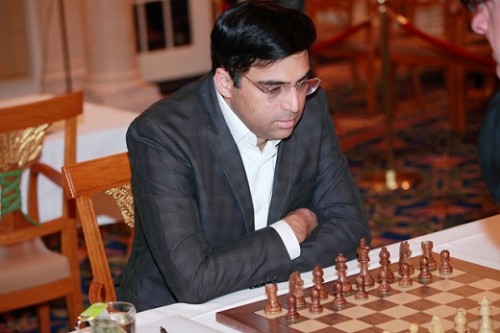 The third decisive result of the round saw the unfortunate Jon Ludvig Hammer falling once again, this time against Teimour Radjabov. The Azerbaijani recovered from his first round loss against Karjakin and is now on an even score. Meanwhile, the Norwegian is having a hard time against this elite line-up and has not managed to score a single half point so far.

Radjabov decided to go into a very calm setup, showing almost no ambition in the opening phase with the white pieces. Hammer expanded on the queenside trying to play on that flank with the support of his fianchettoed dark-squared bishop. A massive exchange of pieces took place in the central squares on move 32, and Radjabov emerged with a superior position. The struggle lasted until move 45 when Hammer offered his hand in resignation with mate in one on the board. 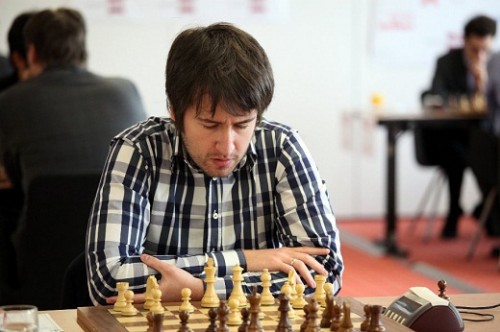 Magnus Carlsen signed his third straight draw, this time against Hikaru Nakamura. The Norwegian star will have to catch-up quickly with Karjakin if he wants to fight for first place. The other draw of the day was Peter Svidler – Levon Aronian. The Russian showed little to no ambitions with white and signed the peace treaty on move 31.

The most expected match-up of the fourth round is Levon Aronian – Sergey Karjakin, as both players are showing very good form.