In a dramatic race of two players who recently contended the World Championship Match in New York, Magnus Carlsen and Sergey Karjakin, the Russian came out on the top to win the gold medal by the virtue of better tiebreak score.

The two players finished on 16,5/21 points each. Just like in the World Rapid Championship Carlsen lost the trophy on additional criteria.

Carlsen entered the final round half a point ahead of the rival, but he couldn’t achieve more than a draw against Peter Leko, while Karjakin defetaed Baadur Jobava. 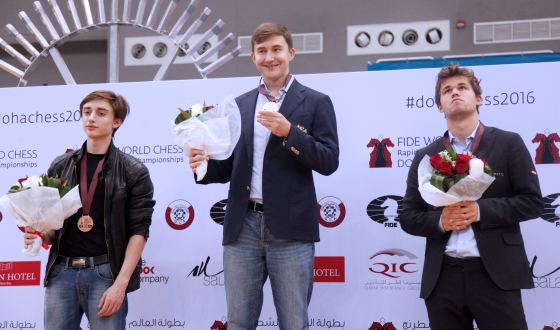 The extent of their domination in the event is shown by the fact that the nearest followers, Daniil Dubov, Hikaru Nakamura and Alexander Grischuk (World Blitz Champion in 2015), were full two points behind. Dubov claimed the bronze medal on tiebreak.

Ukrainian Anna Muzychuk is leaving Doha with two gold medals in the bag.

After winning the FIDE World Rapid Championship two days ago, Anna Muzychuk retained the World Blitz title that she had won two years ago in Khanty-Mansiysk.

Despite the slow start with three draws and a loss to Lagno, the strong finish of five consecutive wins helped Anna Muzychuk to take a clear first place with 13/17 points. 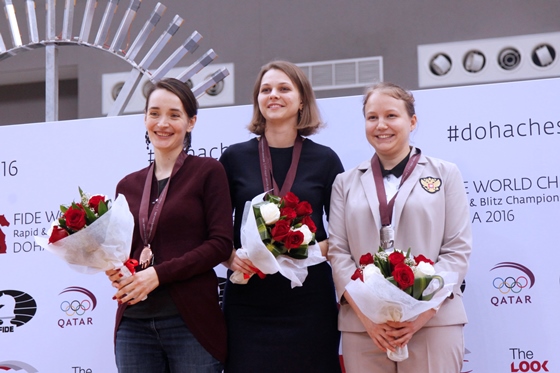 On the shared second place with 12,5 points each are Russian speed-chess specialists Valentina Gunina and Kateryna Lagno. Gunina earned the silver medal on better tie-break and Lagno took the bronze.

Vassily Ivanchuk and Anna Muzychuk from Ukraine have won the gold medals after three days of play at the FIDE World Rapid Championship in Doha, Qatar.

Ivanhuk was tournament leader after the second day but today he was shaken by a loss to Nepomniachtchi and two draws. Vasya, however, won the last two rounds to conclude the event with 11/15 points and claim the trophy on best additional criteria – average rating of the opponents. 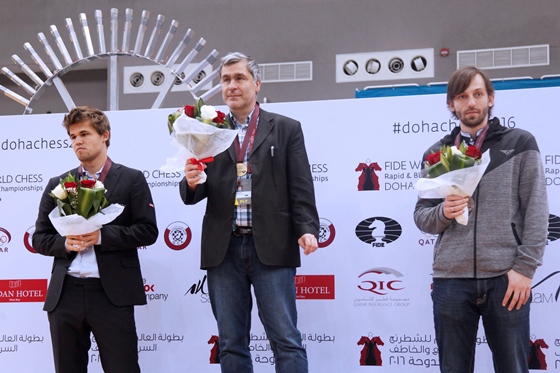 After taking a short break from chess to try himself in different mind sport, Ivanchuk made a brilliant return with great results in the European Club Cup and here in Doha.

In a dramatic finish where five players entered the last round with 10 points each, the two speed-play champions from Berlin 2015 – Alexander Grischuk (blitz) and Magnus Carlsen (rapid) also emerged with 11 points. Grischuk earned the silver medal, while Carlsen took the bronze.

Ian Nepomniachtchi was leading after the 13th round but two consecutive losses in the end took him away from the podium.

Anna Muzychuk dominated in the Women’s Championship having secured the title with one round to spare, finally completing the event with 9,5/12 points. 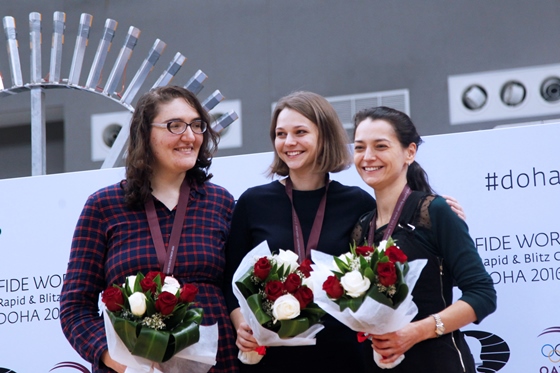 A full point behind the winner is Alexandra Kosteniuk (silver), while Nana Dzagnidze took the bronze medal with 8 points. 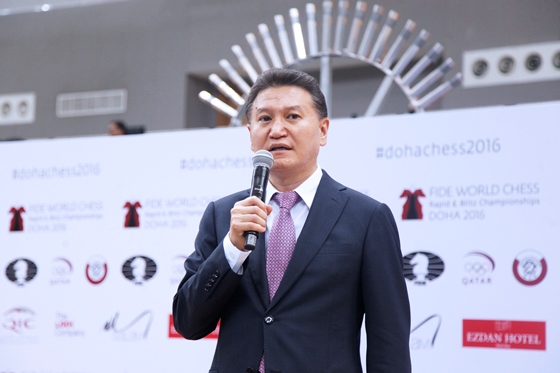 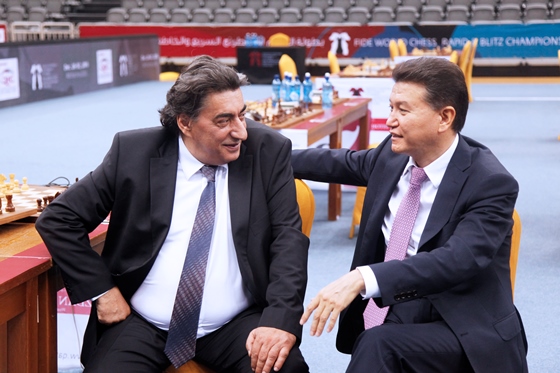