In the first three days of play, two classical and two rapid games were drawn, increasing the tension as the players headed into a 10-game blitz match held on June 13.

Karpov drew the first blood in game one when he prevailed in a razor-sharp pawn endgame.

But the match was far from over, as the two traded victories. Seirawan won a particularly nice game in round five, highlighting the weakness of Karpov’s second rank. 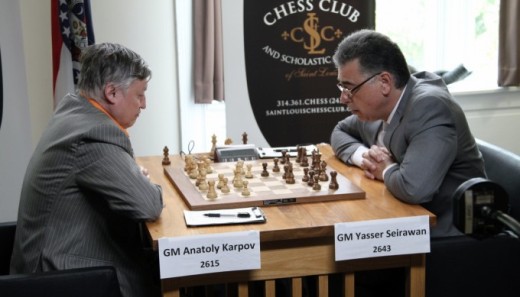 But after a half-time break, Karpov came back sharp and hungry, and he won three games in a row to clinch the match victory and $10,000 first prize.

The final score of the blitz match was 6-4 in Karpov’s favor while the overall match score (one point for each of the four draws in the classical and rapid) was 10-8.

At the post-game press conference both players spoke highly of the overall quality of the blitz match and the playing conditions.

The blitz games with commentary by GM Ben Finegold and WGM Jennifer Shahade can be replayed at http://saintlouischessclub.org/2012-karpov-vs-seirawan-videos