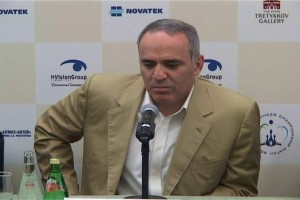 Garry Kasparov has confirmed to Frankfurter Allgemeine Zeitung (printed edition 14.06.2012) that he is firmly committed to push FIDE President Kirsan Ilyumzhinov out of office. He said he is likely running himself for Presidency at the next FIDE elections held in Tromsö, Norway, in August 2014. Having supported Bessel Kok in 2006 and, more strongly, Anatoly Karpov in 2010, Kasparov claims to have learned and is already working hard on a long-term campaign.

Kasparov cites as his main motive of possible candidacy the damage done to chess by Ilyumzhinov´s visits to Saddam Hussein, Muammar al Gaddafi and to Bashar al Assad. He also considers his worldwide efforts to bring chess into schools as a major part of his strategy and as a lead for FIDE to not just focus on chess as a sport but also to establish chess in the education system.

Stay tuned for more updates on the story