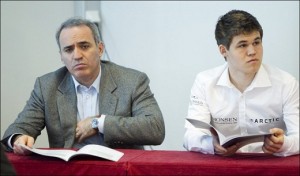 Former world champion Garry Kasparov is currently visiting Oslo where he will celebrate his 50th birthday tomorrow. He is also there to meet Magnus Carlsen‘s manager Espen Agdestein to negotiate a resumption of the collaboration with the Nr.1 player in the world.

Kasparov already worked with Magnus in 2010 and helped him to position himself as the best rated player in the world. The Russian activist declared in an interview with VG that ” if Magnus does his homework well and is psychologically prepared, he will win the match against Vishy Anand“.

The Russian also pointed out that “Anand is an expert at exploiting the mistakes of others”, and that his experience in matches might tell in this year’s main event.

Kasparov became world champion when he was only 22 years old and wants to help the new young star to achieve a similar feat.