Kasparov’s visit to Bratislava might be of great importance to any chess fan in the region – he will play a simultaneous exhibition against recreational players. The simul against the six-time World Champion is held on Friday, 14th October, at Bratislava’s Crowne Plaza hotel. The match begins at 18:00, and will be played on 20 chessboards simultaneously.

The tournament is reserved for players without an official FIDE (World Chess Federation) rating, or those, whose rating does not exceed 2100 points.

If you are interested in playing against the living chess legend, you can also attend an online tournament at http://www.chessfriends.com. The prize for the winner of the Play Against Kasparov tournament is one ticket to the prestigious simul against Garry Kasparov. The registration to the website is free and the tournament can be found under the Tournaments section. The winner must prove his legibility for the simul (the 2100 point limit), otherwise the runner-up player will be awarded the prize. 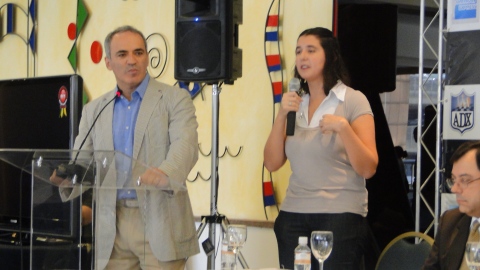 Garry Kasparov speaking during the lecture

If you are interested in playing against the chess grandmaster and not willing to attend the tournament, tickets are still available. Player fee for the world-famous chess player is 1000 euros per game. Part of grandmaster’s earnings will be donated to charity. Those interested in playing a game in the simul, can get more information at sales@chessfriends.com or +421 918 526 329.

“We are very excited about this simultaneous exhibition,” said Marek Holeva of ChessFriends.com, “and we would like to share our excitement with our players.”