AMSTERDAM – Garry Kasparov received the first copy of New In Chess magazine 2014#1 when he visited the Tata Steel Chess Tournament. “I am delighted that you can replay all games without the need of a chess set”, says editor-in-chief Dirk Jan ten Geuzendam, when he presented Kasparov with the iPad and the magazine. “This digital edition travels well. It is great that our readers can now choose between a paper and a digital edition. Or enjoy both!”

In the first digital chess magazine with a gameviewer the reader can play through all games which are annotated by top GM’s. Issue 2014#1 has annotations by Nakamura, Karjakin, Giri, Vachier-Lagrave, Nepomniatchi and many others. 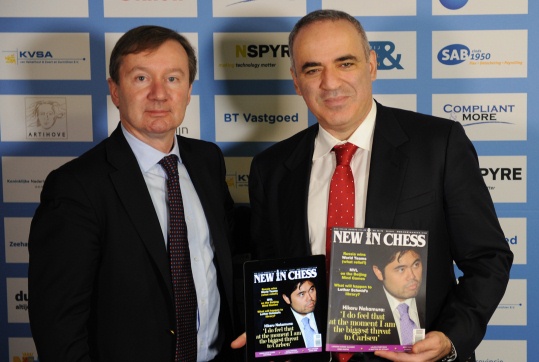 Hikaru Nakamura: I’m the biggest threat to Carlsen
Jonathan Speelman on the trickiest player on the planet
Yuri Dochoian explains why coaching the Russian team to victory in the World Team Championship was a hell of a job
The 30,000 chess books of Lothar Schmid
Willy Hendriks on Turing, Alzheimer and chess
Mihail Marin: why was Lajos Portisch so good?
Nigel Short: how the Brits invented rapid chess
Jan Timman: what really happened in my match with Karpov
Daniel King on playing the bass-guitar

New In Chess 2013#8 is still available as a FREE download for iPad. This issue features the World Championship match between Magnus Carlsen and Vishy Anand. Top-GM Anish Giri analyses the crucial games of the match. Vishy Anand explains why he lost and Russian GM Sergey Shipov points out why Carlsen won.

The apps for Kindle Fire and Android tablets will be available soon.