Two legends of the two brain game siblings, chess and shogi, played a match in Tokyo, on 28th November, 2014.

Yoshiharu Habu and Gary Kasparov met over a two rapid games match in what is supposed to bring chess and shogi ever closer. They are counterparts in their respective careers, each of them having reached the pinnacle of success.

However, while Kasparov has retired from active competitive chess, Habu is still a leading active player in shogi. They have both ventured into each other’s camp; Kasparov has tried his hand at shogi in a more sporadic manner, while Habu has been more persistent in his attempt to master chess.

He has participated at several international tournaments, has achieved a FIDE Master title, two IM norms and a current rating of 2415. Today he is a top player in Japan in both chess and shogi. Having played chess for just a few years, this is quite a leap forward. Obviously, his shogi trained mind and attitude must have contributed to such a rapid progress. 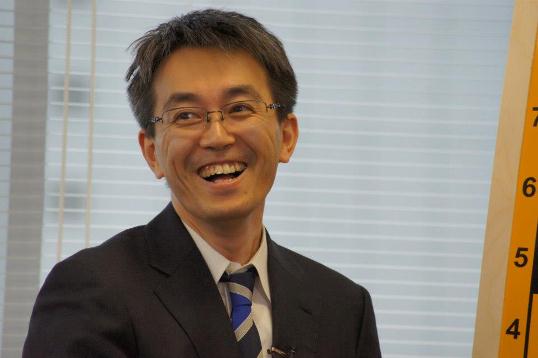 Kasparov made a humorous announcement to the delighted audience before the start of the match: ‘Habu plays more chess than I do these days!’

The two opponents, although quite unequal by strength and experience, played the match on equal terms. No handicap! The two rapid 25 minute- games were won by Kasparov, but not without struggle. 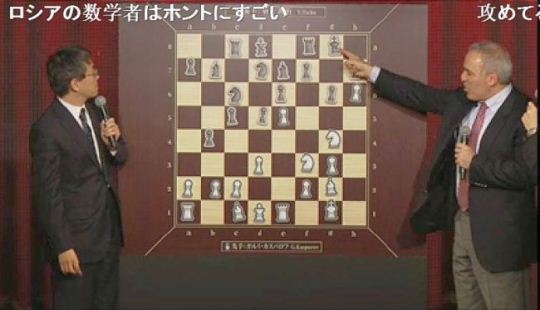 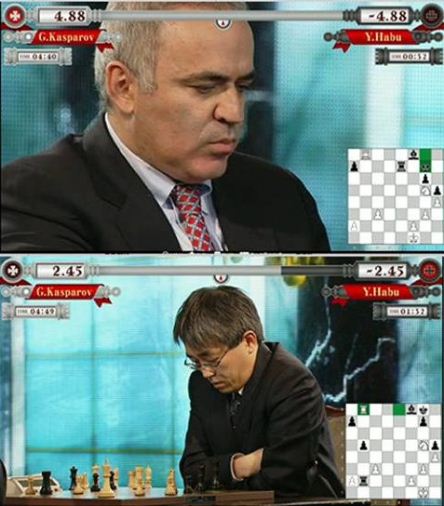 A screen shot from the live video: Kasparov v Habu

And while the match Kasparov v Habu has echoed with enthusiasm within both chess and shogi communities, the purpose of Kasparov’s visit to Japan was connected to yet another interesting development within the shogi world – the launching of the shogi computer against humans match due to take place next year, in March.

The human vs machine event is called ‘Denou-sen’ and it is designed as a team match between the five top human shogi players against the five top shogi computer programs.

Kasparov was given the honor to perform the traditional ‘furigoma’ at the promotional ceremony dedicated to the elite Denou-sen human versus computer shogi event.

The ‘furigoma’ (roughly translates as ‘piece toss’) is equivalent to the drawing of lots in chess, to decide which player will move first. Last year, this honor was bestowed to the Japanese Prime Minister, Abe. 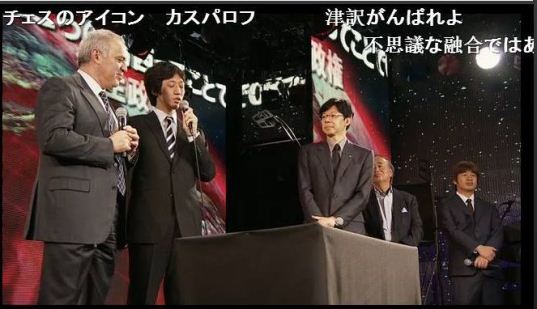 Ever since Kasparov’s match against the IBM Deep Blue in 1996, computer chess engines have been improving at a great speed and have reached a level at which they are unbeatable by humans.

The computers’ involvement in shogi started much later and it has been much slower. But most importantly, these ‘intruders’ were received with skepticism by the shogi public who were unprepared to accept that a machine could ever beat a human in their beloved and highly respected brain game.

That however did happen, to a great astonishment, when, in the last year’s ‘Denou-sen’ match, the humans lost 1-4. So the outcome of the next humans vs machines match is highly anticipated. 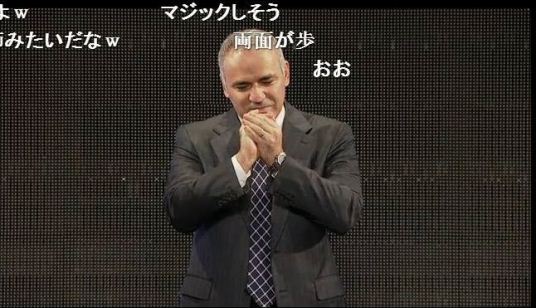 Kasparov has used this event to confirm, yet again, his commitment to mind sports: ‘I hope this can lead to greater cooperation between chess, shogi, and other mind sports. Of course, I am fully on the side of the humans in this match and I hope my furigoma brings them luck!’