The first round of the Women’s World Team Championship in Astana was played today. FIDE President Kirsan Ilyumzhinov made the first symbolic move in the game Nakhbayeva – Zatonskih to start a tense struggle between the young and ambitious team from Kazakhstan and the rating favorite of the match – the team from the USA.

For a long time, it seemed that the match would finish in favor of the Central Asian team, but Dinara Saduakassova, who was so close to the victory, made a mistake and let her opponent make a draw. Thus, the USA equalized the score and managed to save face. 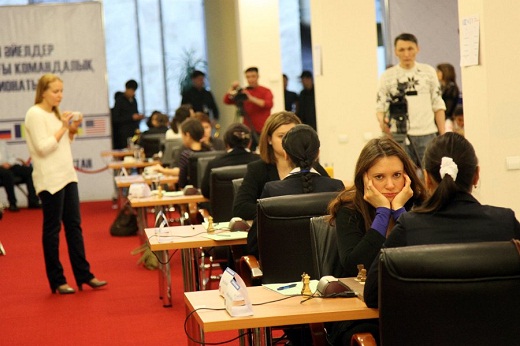 There were no surprises in the rest of the matches – all other rating favorites managed to win quite confidently.

China and Russia lost only half a point each and were stronger in the matches against France and Romania, respectively.

The appearance of Alisa Galliamova in round 1 came as a surprise. It is well known that she prefers to travel by train, so just after a few hours of rest, she was already playing and contributed to the victory of her team with a win over Alina L’Ami. In the game Kosteniuk – Bulmaga, the Romanian player sacrificed 2 pawns in the opening, but had enough compensation to secure a draw. 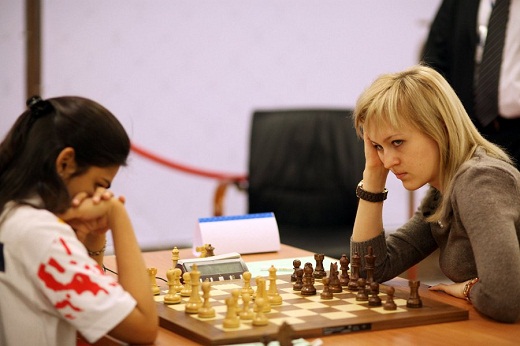 It was not difficult for the Ukrainian team to outplay the Indians, which came here without their top three seeds: Humpy Koneru, Harika Dronavlli and Tania Sachdev. World Champion Anna Ushenina and Ukrainian champion Maria Muzychuk won against Nisha Mohota and Rout Padmini and, after two draws on the other boards, the final score was 3-1 in favor of Ukraine.

After the first round, four teams are in the lead – China, Russia, Ukraine and Georgia.