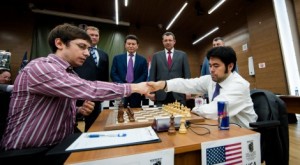 In the final 11th round of the FIDE Grand Prix in Khanty-Mansiysk Fabiano Caruana and Hikaru Nakamura drew their respective games to take the top two spots in the overall Grand Prix standings and qualify for the 2016 FIDE Candidates Tournament.

The Ugra nominee Dmitry Jakovenko was in position to fight for qualification in the direct duel against Nakamura, but he couldn’t achieve more than a draw with black pieces.

Eventually, Caruana, Jakovenko and Nakamura shared the first place in the last Grand Prix tournament with 6,5/11 points each.

Results and standings are online, visit also the photo gallery and replay the games.

A short unofficial ceremony preceded the start of the last round: FIDE President Kirsan Ilyumzhinov, his adviser Berik Balgabaev, and RCF Executive Director Mark Glukhovsky planted a lilac tree in the Honor Alley near the Ugra Chess Academy. Now they will have an extra incentive to visit the Ugra capital.

The tournament intrigue lived until the last day, but the last round did not bring any major changes. Five games ended in a draw, and only Peter Svidler slightly improved his position by winning against Baadur Jobava. 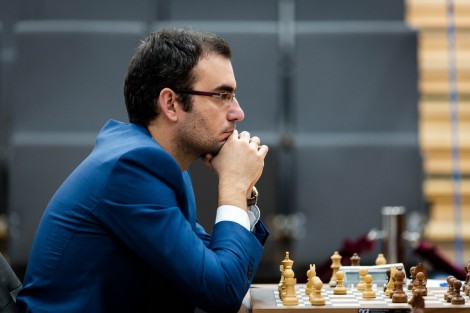 The players followed one of the main lines of the Sveshnikov Sicilian for like 20 moves. Dominguez played quickly, and Grischuk took take for each move. “Alexander probably did not remember the variation and therefore had to look for the best moves at the board”, suggested Lenier. “Yes, I only remembered the conclusion that this line is a draw”, confirmed Alexander.

After Black played all the best moves, it led to an approximately even position, and White’s novelty did not change the evaluation. On the 25th move Dominguez had a choice of either transposing to an equal ending or forcing the perpetual, and he went for the latter. 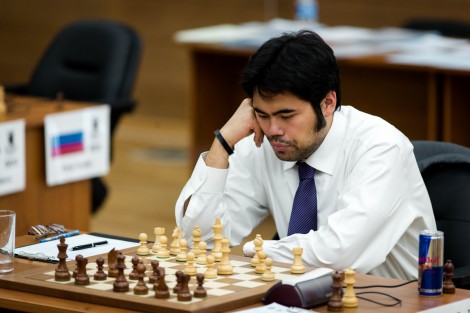 This was a key game for the Candidates Tournament qualification, and Nakamura’s chances were much better, as he played White and was content with a draw. The American expected his opponent to go for some crazy line, so he decided to play very safely. Consequently, he went for the 4.Qc2 Nimzo-Indian, which is a very solid setup.

Dmitry Jakovenko, however, did not burn the bridges. At the press-conference he explained that finishing third overall had its merits for him, so he had something to lose. For example, if Nakamura or Caruana advances to the World Cup final, then finishing third in the Grand Prix gives a seat in the Candidates.

Nevertheless, Jakovenko attempted playing for a win by the provocative 14…Rac8!? White could go for favorable complications by 15.d5! exd5 16.Nf5!, but Nakamura even did not bother calculating it and selected the safest reply.

The central pawns were soon exchanged, the position simplified, and Black’s slight initiative evaporated. As Jakovenko pointed out, Black’s last chance was the cooperative line 32.Kf3 h5 33.Qxb6 h4!, but Nakamura simply moved his king to h2, and a draw was agreed in a few moves. 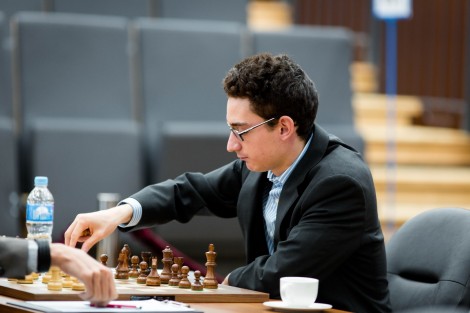 Fabiano Caruana did not try to hide his happiness, he smiled a lot and joked a lot. “For the whole game I remembered that a draw is a good result for me, and then I saw 22.g4”, commented Fabiano on White’s daring attempt.

The young Dutch grandmaster demonstrated a very clever psychological approach. First he tested the opponent in a fashionable line of the English Opening, which often occurred in practice of Boris Gelfand and Levon Aronian, and when Caruana avoided all the minefields (by just remembering his home analysis), White suddenly played something very sharp.

“I knew I do not risk to lose”, explained Anish Giri, “and just wanted to see if Caruana has a heart attack after 22…g4.”

However, Fabiano showed that his heart is strong enough. Defending against White’s dubious attack, he made extremely solid if not too tight moves, but nevertheless regained the initiative. Still, Caruana traded the queens as soon as he got a chance, and offered a draw at the same time. Giri had no reason to decline the offer.

“The g4-break brought my opponent success against Tomashevsky, and perhaps he decided this move is always strong”, concluded the Grand Prix series winner. 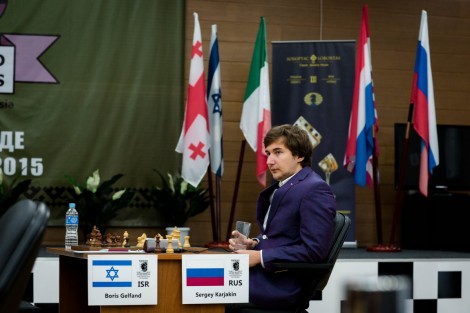 A relatively new subvariation of the Najdorf was a subject of the opening discussion. “7.а4 is of course not the main move, but it already occurred in games of strong players, for instance, I remember van Kampen-Grischuk”, said Sergey Karjakin.

A complicated and relatively fresh position with all the pieces on the board arose. Black had an isolated pawn on d5, but it was compensated by good pieces play. Karjakin thought White was slightly better, but Gelfand was confident Black has sufficient counterplay.

Sergey criticized his 27.Bxh3 and suggested 27.b3 followed by Bf4, which could give him a chance to claim an edge. “However, I totally forgot that Black can just trade on d4”, said Karjakin. “Yes, after 29…Bxd4+ black pieces are very well coordinated, and White’s coordination is very poor”, added Gelfand.

Still, the position remained dynamically balanced, and soon the players agreed to a draw. 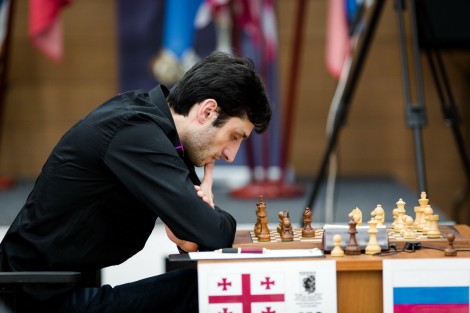 Grischuk once said that not everyone is capable of writing poetry, but not everyone is capable of playing prosaic chess either. Once in a blue moon Baadur opted for a solid line – the Rubinstein French, and, by the way, solved his opening problems easily. However, his poetic soul could not bear it: the Georgian grandmaster refused to trade queens, went for complications are went down in flames.

“I should play rook endings in every game, but unfortunately it is not always possible”, said Peter Svidler in the beginning of the press-conference. “Actually I think what Baadur did was rather unfair: against others he played 3…Nс6, and against me he took on е4!”

Svidler’s speech was sharp and emotional, and it was nicely supplied by Jobava;s remark. I will not quote it, but I urge you to find time and see the video from the press-conference. To sum it up, White bluffed in the opening and got no advantage, then Black got carried away by kingside maneuvers and allowed the d4-d5 break. A rather simple position with a stable advantage for White arose. According to Svidler, the endgame is probably drawn objectively, but it is not easy to achieve. Jobava did not manage to survive, allowing his opponent to return to a 50% mark. 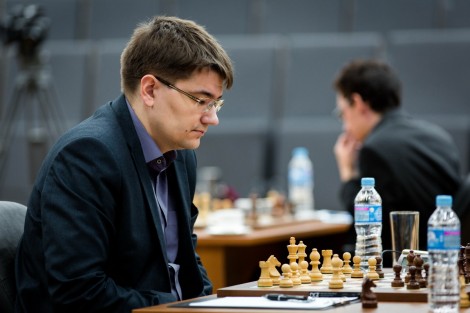 Winning this game could give Tomashevsky theoretical chances for the overall second place, and he fought the tenacious Frenchman for seven hours. Like a couple of days ago against Domiguez, Tomashevsky employed the 4.Bg5 Gruendfeld and won the opening duel, although Vachier-Lagrave selected a different plan. These two games actually have a lot in common – in both of them Tomashevsky had an extra pawn in the ending, and in both of them did not succeed to break opponent’s defense.

All the honored guests already arrived to the playing hall. Ugra Governor Natalia Komarova and FIDE President Kirsa Ilyumzhinov answered all questions and opened the Chess Museum in the Academy, and the game was still playing. Well, this time Tomashevsky did not succeed, but such stubbornness and love for chess will surely be rewarded in other tournaments.

We wish Fabiano Caruana and Hikaru Nakamura best of luck in the Candidates. See you next time!