Saint Louis, September 11, 2011 — As expected, the first day of the Kings vs. Queens tournament produced the fireworks everyone had hoped for! Taking into consideration the fast pace of both formats (rapid and chess960), the games were exciting, uncompromising and thankfully for the spectators, not free of mistakes and heartbreakers.

While on paper the teams are evenly matched with an identical average Elo rating, the results on our first day were quite lopsided. Of course, looking at the positions in real time as the games were progressing, one could not have predicted that when the smoke would clear, the men would rack up 7 points to the women’s 3.

The day started with yet another draw – this time not for colors or seed numbers, but rather for the one out of the 960 possible starting positions. In case you wonder what our brave competitors had to deal with, well here is that starting position! 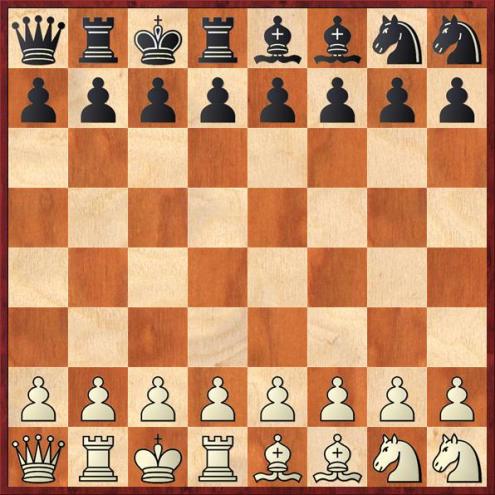 A queen in the corner, the king ‘stalemated’ between his two rooks, and all the minor pieces clogged on the kingside—what more can we ask for? Of course if you spoke to GM Hikaru Nakamura, you’d get a scary (and incorrect) feeling that he knows this position as if it was old theory. In his game versus IM Martha Fiero he confidently opened with 1.g4 and after only 20 moves his opponent had to acknowledge defeat. The position went from the one above into: 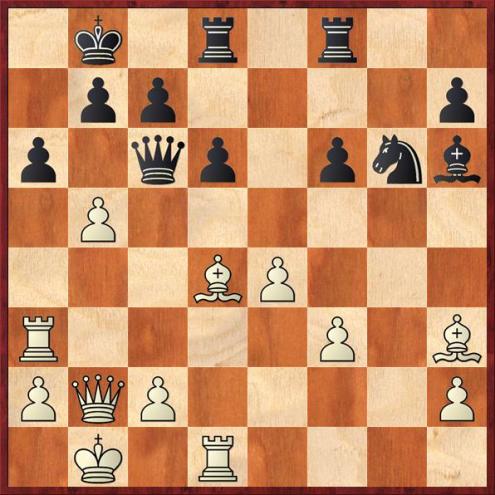 As Nakamura was interviewed by commentators GM Yasser Seirawan and WGM Jen Shahade, Fierro stood next to me, and with her signature smile asked me jokingly: “How can you beat this guy?!”

Their rapid game was altogether a different affair. Despite Nakamura’s precautious play, Fierro kept a cool head and with solid play managed to create a complete blockade, where black’s winning chances were non-existent. After a lot of piece-shuffling, she could have played 60. Nc7!, which threatens to take on a6 and push b7, and when black stops it with 60…Rh8, there follows 61.Ne6+ Ke5 62.Nxg7 with 63.Rxf4 and white is up a pawn with serious winning chances. In the actual game after endless maneuvering, Fierro ended up winning the loose f4 pawn, and the game reached the following position: 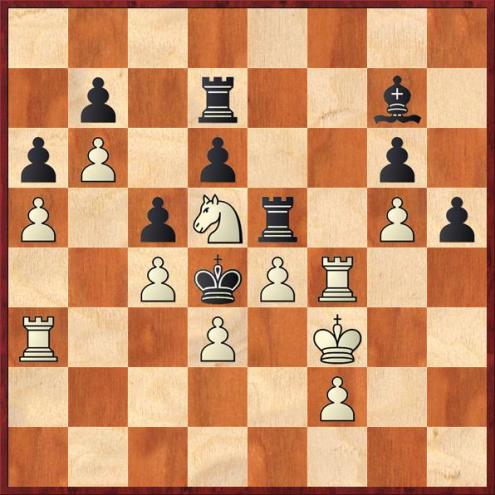 Had she played 83.Nc7! here, Nakamura could have resigned with a clear conscience, as Rb3 with Nxa6 is coming and trying to activate the rook on e5 (say 83…Ree7) leads to mate in a few moves after 84.e5+!. Instead white played 83.Nf6?, which was still acceptable to stave off the loss, but later after allowing the black kingside pawns to advance, could no longer hold the position.

On board two GM Ben Finegold also scored the full two points against current U.S. Women’s Champion IM Anna Zatonskih. Her first round random game was going fine, until she inexplicably played 27. R1d2?? Simply overlooking 27…Nxd2, which wins the exchange, and subsequently the game. In the rapid game Finegold decided to put the game to sleep by trading queens very early in an almost symmetrical position. Surely in a long game Zatonskih would have done fine, but the fast time control was a different story. First she let her opponent get the bishop pair, and then slowly drifted in the minor pieces endgame. That very pair of bishops went on a pawn hunting rampage, and black’s attempts to sacrifice a piece turned unsuccessful.

New Yorker IM Marc Arnold, 18, is fresh off a very successful European chess summer, which propelled his ELO rating to over 2500. He managed to split the points with former women’s world champion, and current women’s chess960 champ, GM Alexandra Kosteniuk. Early on in their chess960 encounter, the Russian aggressively sacrificed a pawn: 10…e4!? 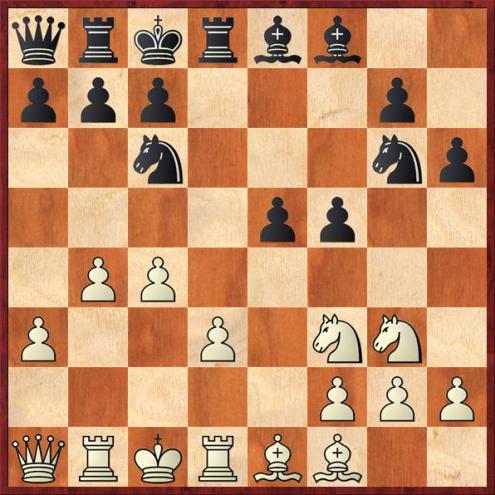 Arnold took the pawn and lived to tell about it. Kosteniuk desperately gave two minor pieces to expose the white king, but lacked the firepower to succeed—0-1 on move 35.

All of this was just a precursor to the real drama that their rapid game provided! In a Najdorf white (pseudo) sacked a pawn, then black sacrificed one too. Black then gave up an exchange—again a decision that might have been harshly criticized in a regular time control game, but this gave Arnold ample counter chances in a rapid game. Both sides had their chances, but after white substituted 31.Rc7?? for what could have been a nice tactical knockout with 31.Qd5!, black was completely winning. But wait!! Now comes the amazing part: first white realized that the position repeated three times, but was not sure of it, and so did not claim it. It must have been her female intuition as on move 45 we arrived at the following position: 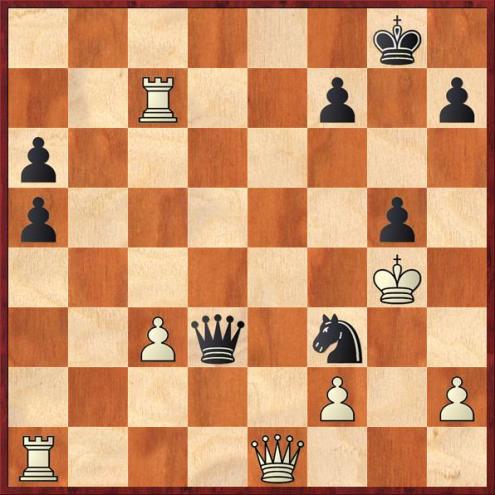 Here 45…h5+ or the immediate 45…Nxe1 will ‘win the world’ immediately (in fact the concept of taking the queen now that the black king is not mated like before was completely missed by both players in the heat of the battle!). Instead the clock went down to 0:00 and a relieved Alexandra informed her young opponent that he overstepped the time limit. What a finish!

The Kings’ IM Jacek Stopa was admittedly very lucky today. In game one, IM Irina Krush consistently improved her position to achieve an overwhelming advantage. Nakamura, who was observing the game, suggested moving the black queen away from the only open file, only to soon dominate it with both black rooks. He even went as far as to suggest a passive sacrifice of one of the rooks on e4, so as to recapture with a pawn, activate the black queen and with the newly formed pawn duo in the center, guarantee a pleasant outcome. With time running short, Krush allowed her Polish IM opponent some heavy-duty counter play, which eventually led to her demise.

Game two saw Stopa gambiting a pawn in the early stages of the opening, for speculative initiative. After black’s 23…Rb8 we arrived at the following position: 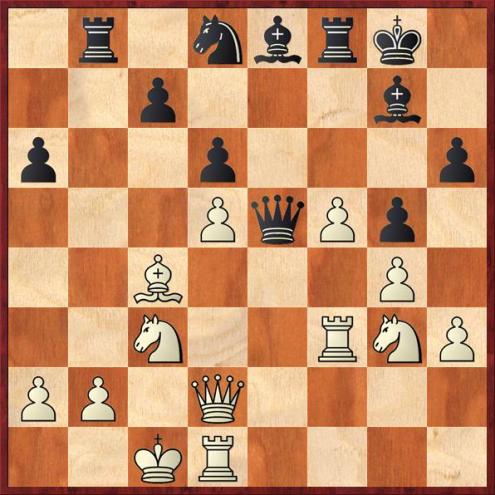 In the actual game, white won an exchange, which should have also sufficed, but in hair-raising time trouble, black kept picking up pawns, complicating matters. The final tragedy from Krush’s point of view, came on the 53rd move: 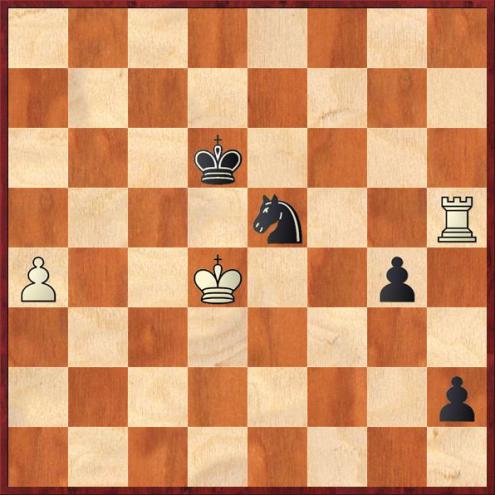 Last but not least was the match between local 14-year-old NM Kevin Cao, the youngest player in the field, and his much more experienced opponent, former women’s world chess960 champ GM Kateryna Lahno. Kevin was very close to making a draw in game one, but like we have seen so many times already, time played a big role, and in the end Lahno’s mischievous knight proved too strong for Cao’s passive bishop.

The rapid game was a tour de force of the Ukrainian GM, as she completely outplayed her young opponent in a Pirc defense. Her queen showed hyena-like relentlessness, picking one pawn after another, forcing an eventual resignation.

So the Kings team has opened a 4-point gap, but as Kosteniuk optimistically noted, it is only day one, and there are four more full days of fight! And fights she promised!

Follow live commentary analysis at www.livestream.com/uschess, or come on down to the Chess Club and Scholastic Center of Saint Louis to check out all of the action live!

New Winners Shuffle Standings in US Champ Race
While the U.S. chess king questioned who might bear his crown next, America's queen began resizing hers. Four-time champion Gata Kamsky walked through another uneventful ...