The supervisory board of the Russian Chess Federation approved Kirsan Ilyumzhinov as candidate of the RCF for the upcoming FIDE elections on October 3rd in Batumi. The meeting took place in Grand Hotel Zhemchuzhina, Sochi. The RCF official website report states,

The floor was given to Kirsan Ilyumzhinov – FIDE President presented his program and team (so called “ticket”), with which he would run for the 2018 FIDE Presidential elections. Mr. Ilyumzhinov answered many questions from the audience and promised to the Board Members that such a notorious person as Mr. Danailov would not be included in his team. The Supervisory Board decided to support Kirsan Ilyumzhinov’s candidacy in the forthcoming FIDE Presidential elections. 11 Board members voted for, 0 – against with 8 abstentions (19 votes in total).

Among other decisions of the supervisory board, the emblem and logotype of the Russian Chess Federation were presented. The Supervisory Board members discussed several variants and voted in favor of the logotype and corporate style in the photo above.

Executive Director of the Russian Chess Federation Mark Glukhovsky presented strategic directions of the Federation’s work in 2018-2022. A lot of attention will be paid to the development of regional chess federations and holding large-scale internal and international competitions in different regions of Russia.

According to the report of the Deputy Execute Director of the Russian Chess Federation Alexander Tkachev, the projects of the Regulations on the work of all RCF Commissions, except for the Coaching Council and the Women’s Commission, are ready by now. The Supervisory Board confirmed the Regulations.

It is known that the RCF Ethics Commission appeared after the Congress in February 2018. At the RCF President’s suggestion, the Commission will be headed by Irina Lymar, a well-known lawyer and a WGM.

Vladimir Kirsanov, Chairman of the Board of Directors of the DON Group of Companies, was included into the RCF Board of Trustees. 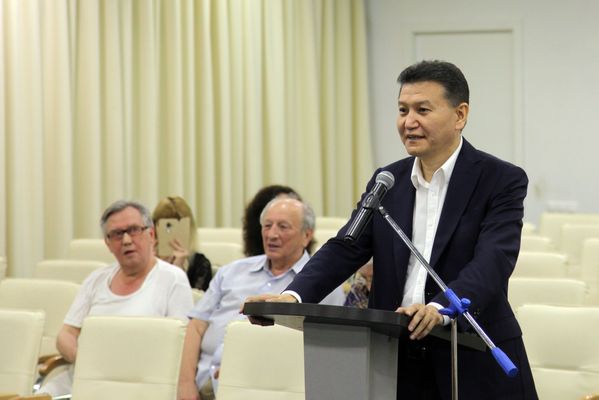 Kirsan Ilyumzhinov at the supervisory board