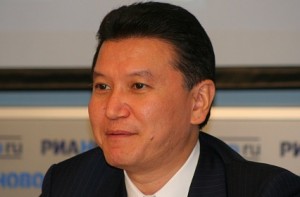 The following press-release was issued by Kirsan Ilyumzhinov today.

We have done a great job together: united the chess world, increased the number of national federations and official tournaments, attracted new technologies and increased interest in the ancient game. We set an ambitious task to bring the number of chess players to one billion.

For its implementation, I intend to lay the foundations of a systematic work that will let me achieve this goal. Even being under sanctions, I registered a charitable foundation “Kirsan Fund” in the United States.

Its activities will cover North and South America. This month, I plan to open the Kirsan Fund in Brussels (it will work in Europe and Africa) and in Seoul (it will cover Asia, Australia and Oceania). I intend to invest 10 million dollars in each of them.

The mission of the foundations will be the introduction of chess into the education system and creation of chess schools. In addition to the “Chess in Schools” programme, we will promote new projects: “Chess in villages”, “Chess in families” and “Chess for people with disabilities”.

I started helping the chess world even before I was elected President of FIDE. Garry Kasparov addressed me with a request to help hold the Championship of Russia in 1994. Greece refused to host the World Chess Olympiad and Kasparov suggested transferring it to Moscow in the same year. I granted 100,000 dollars for the prize fund of the Championship and more than one million dollars for the holding of the Olympiad. I organized 14 men’s and women’s championships of Russia using my own money. I granted tens of millions of dollars to chess over the years.

Now in addition to the professional sports, I intend to focus on the development of chess and to make chess a People’s Game. Anyone who is truly committed to the spirit of chess and the principles of FIDE can take part in the work of the foundation that I have organized. The experience and authority of all the national chess federations and fans of chess would be very useful for us.

Gens una sumus! We are one family! Let’s make chess a People’s Game!