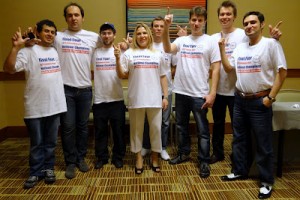 Susan Polgar and the Knight Raiders

The TTU SPICE Knight Raiders, led by Susan Polgar, have captured their second consecutive Final Four title. The team won the cup in a nail biter, finishing just 0,5 points ahead of UTD and UMBC.

With this victory Susan Polgar, Knight Raiders head coach and director of the Susan Polgar Institute for Chess Excellence, is the first woman in history to lead a men’s Division I team to two straight national championships. “It was total teamwork. Nothing was decided until the final second,” Polgar said in the Tech release. “We are very proud and happy to bring another Final Four Championship to Texas Tech.”

The victory comes just a month before the SPICE center along with highly recruited Grand Master-level players move to Webster University in St. Louis.