Three Indians J Deepan Chakkravarthy of Tamil Nadu, Abhijit Kunte of PSPB and Vidit Santosh Gujrathi of Maharashtra and one Bangladesh grandmaster Abdulla Al-Rakib share the lead with three points each at the end of third round of the 19th International Open Grandmasters Chess tournament, organised by Alekhine Chess Club at Kolkata, today.

In a Benoni defence on the top board, Levan Pantsulaia of Georgia had to forego his rook, getting only a bishop in compensation from Abdulla. In the resultant queen and rook vs queen and knight ending, Abdulla used his extra pawn to register a win in 62 moves.

Bangladesh had a field day today, as its another grandmaster Ziaur Rahman caused the biggest upset of the tournament so far, by beating the top seed Nigel Short of England. Ziaur deviated from the regular Nimzo Indian defence to exchange the queens as early as on 8th move. He capitalised on some weak moves by Short to position his rooks strongly. Fearing the loss of further materials, Short resigned after 28 moves.

Adopting Nimzo Indian defence against Debashis Das, former under 14 world champion Vidit Santosh Gujrathi of Maharashtra launched a heavy attack on the king side, with his queen, rooks and bishop. When Vidit sacrificed his bishop by playing B x h3, Debashis realised the danger and gave up the fight immediately after 22 moves.

In a Slav defence, former Asian Junior champion Deepan Chakkaravarthy of Tamil Nadu sacrificed his bishop on the 13th move against 2012 Commonwealth champion MR Lalith Babu of PSPB. To escape from his queen being cornered, Lalith Babu had to return the piece after seven moves, bringing parity to the game. Deepan gained a pawn in the end game and his connected pawns at the centre were vital to force a win in 60 moves.

Overnight leaders from West Bengal suffered a setback, when youngster Diptayan Ghosh had to be content with a draw against Oliver Barbosa of Philippines in a Slav defence game. Former national champion Abhijit Kunte of PSPB, commencing with Sicilain defence, continued his good run by beating Deep Sengupta, Kolkata’s highest ranked player in the tournament. 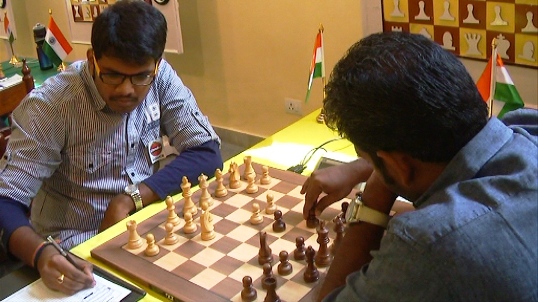