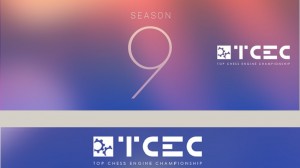 TCEC – the Top Chess Engine Championship – is past the middle point of the double round robin Stage 2. The winner of last season and the preliminary Stage 1a – Komodo by Larry Kaufman, Mark Lefler and Don Dailey – is currently leading with 11,0/15. The Grand Champion managed to hold the final sprint of its opponents to keep a full point advantage.

This season of TCEC proves to be not only the highest as ELO average in history of chess, but also the most disputed TCEC event ever. The rivalry between Komodo and Stockfish continues, as Stockfish is just a point behind the leader. While this particular rivalry is no surprise, we can state with certainty that TCEC is not a two horse race anymore. Fire 5 is with the same points as Stockfish, sharing the second position. Just half a point behind is the new version of Jonny and it is quickly followed by the newcomer Andscacs.

The fight for the top 8 positions, which give right to participate in the next stage, is not less interesting. Gull and Houdini with 8,5/15 share 6th and 7th and the last qualification spot is for Hannibal with 8,0/15. Rybka and Ginkgo are their closest contenders with 7,5/15, and a little more behind we find Nirvana with 6,5/15.

Protector, Vajolet, Chiron, Raptor, and Naum might already be out of contention for the qualification positions, but their games are of high importance. For example Raptor managed to take points from Stockfish, Jonny, Fire, while Chiron was a “Dragon Slayer” and stopped both Komodo and Stockfish. There is no more such a thing as “weak engine” and every match should be taken seriously.

The second part of the TCEC Stage 2 double round robin is underway and you can follow it live on the official website – as usual with the engine’s “biometric data” including Principle Variation, Depth, Speed, Evaluation, TB hits and a 24/7 chat with the experts.

Standings at halftime at TCEC Stage 2 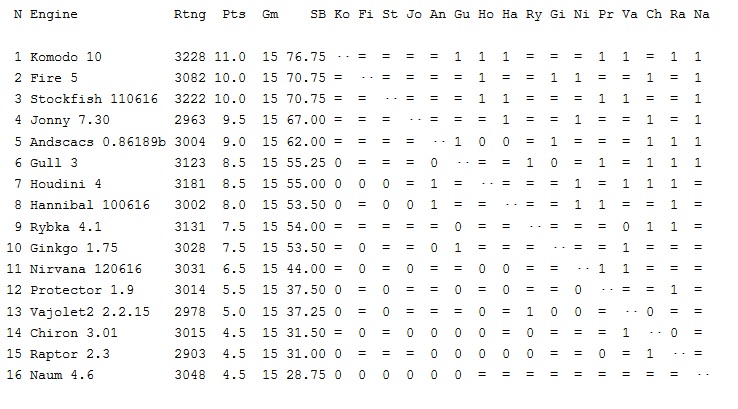