The Top Chess Engine Championship arrived today at the halfway point of Stage 2, and it did it with a bang. There were four main trends throughout the first half: Houdini leading comfortably the standings, Komodo putting up serious fights to keep the second position, Stockfish with grim chances and always out of the qualifying positions, and Fire challenging the dominance of the top 3. With just two games in round 14 these trends were turned around.

The game was the return game of round 7, with reversed colors and the same opening – Queen’s Indian: Petrosian, 6.cxd5 Nxd5 7.e3 g6. There was a novelty right on move 1 out of the opening book as Houdini preferred a direct 8… Nxc3 instead of the previous game’s choice of Komodo 8… Bg7 to Both engines evaluated similarly the opening as equal (K +0.19, H +0.03). The middlegame was complex, with Komodo constantly trying to find advantage and Houdini staying calm. The position at move 47 looked like yet another “Grandmaster Engine draw”. 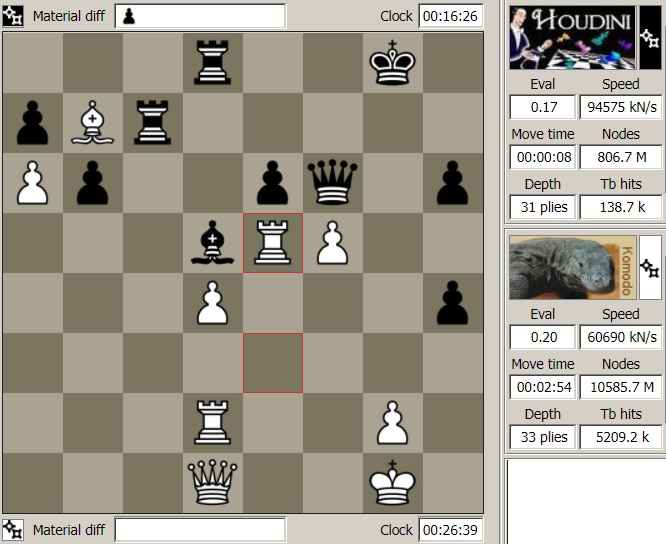 And then the room went Boom! Houdini decided to exchange the bishops on the b7 square and Komodo jumped on the opportunity. With the game now in 4th phase, a position with only heavy material on the board and favorite topic of analysis of Kotov, the white side saw the correct way to proceed – 50. Rf2 putting pressure on the queen and taking control of the queenside. Nothing could stop the advance of Komodo which planned a glorious king walk from f1 to b8 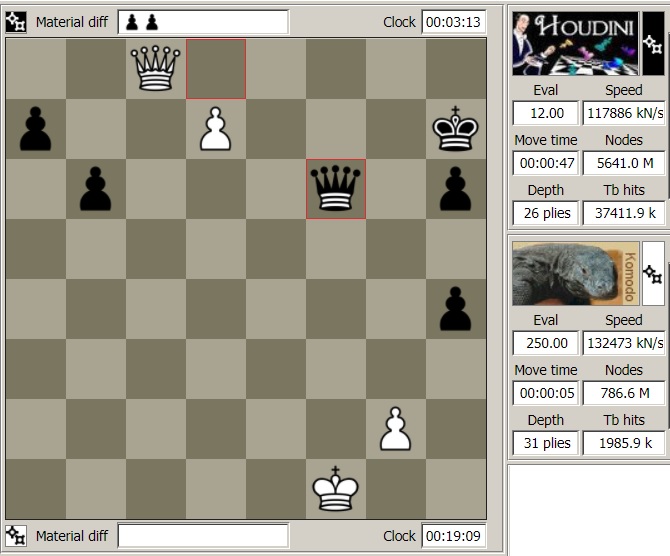 The final position of Komodo – Houdini. Black is two pawns up, but a king walk is coming that decides the game in white’s favor

Stockfish was suffering so far in this stage, finding only three decisive wins in the thirteen games played and despite continuing without a loss it was firmly on third position. However, the game Komodo – Houdini 1-0 gave Stockfish a unique opportunity ahead. It was facing Fire with white and in case of a win Stockfish would become shared second. However, in case of a loss, Stockfish would even lose the third position to its direct opponent Fire.

The game started as Benoni: 6.e4 g6 , where white was more optimistic for an advantage evaluating it at +0.41. There was a good reason for this optimism as brilliant play by Stockfish followed. Move after move it was finding micro advantages and without any obvious mistake by black the eval was already +3.00 at move 35. A huge display of playing with 2 rooks and passed pawn vs Queen followed, which brought white the victory.

Does that decide the Benoni opening presented in the game as decisive for white? Hard to tell, as the game with reversed color was an absolute draw from the beginning to the end (replay here)


Follow the live games at the official website where 14 more rounds will be played in this stage. The top two engines will qualify for the Superfinal. As per the new format starting Season 11 the top 6 engines will continue in the Premier Division, the bottom two are relegated to First Division.