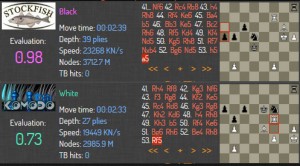 Stage 3 of the world’s strongest computer chess championship TCEC has come to an end. Komodo is the winner of the stage with the amazing 11,5/18, a full 1,5 points ahead of competition. Komodo achieved 6 victories, 11 draws, and lost just one game to prove that its win in the previous stage was not a coincidence.

In a very close battle Bouquet, Houdini, and Stockfish shared the second position with 10,0/18. The silver medal of the stage goes to Stage 1 winner Bouquet with best tiebreak. The bronze is for the top rated engine in the field Houdini, while 4th place is for Stockfish, which is the only engine to achieve double victory in the stage.

The drama of Stage 3 was for the 6th position race, as the top six engines qualify to the next Stage 4 for a hexa round robin. Naum 4.6, Hiarcs 14, and Rybka 4.1 achieved 8,5/18. The tension was kept to the very end with the games Rybka – Gull and the 105 mover Houdini – Hiarcs in progress. In the end, Naum’s upgraded version for this stage had better tiebreak, and so it progresses on, while Hiarcs and Rybka are eliminated until the next season of TCEC.

Stage 4 consists of the 6 engines that qualified from Stage 3 – Komodo, Bouquet, Houdini, Stockfish, Gull, and Naum 4.6. The competition is a hexa round robin and the top 2 engines will qualify to play the Superfinal. Live games here starting at 19:00 CET