Eight engines are competing in a quad round robin format and only the top 4 will move on to Stage 4, while the rest are out of TCEC for the current season.

One of the most interesting encounters of the third Stage was the battle between Komodo and Stockfish in the first round of TCEC Season 6 – Stage 3. We bring you the game, annotated in-depth by GM Davorin Kuljasevic.

7…Be7 [The famous “Poisoned pawn” variation starts with 7…Qb6; while 7…h6 8.Bh4 Qb6 has been the most recent try by Black, with Najdorf experts such as Vachier-Lagrave, Dominguez, and Wojtaszek giving it a shot.]

9.Bh4 0–0?! [Now, this is a real sideline, and a dubious one at that. Black does not usually castle this early in Bg5 Najdorf, at least not until he has had some counterplay going on the queenside. The presence of the pawn on h6 makes this idea even more suspicious as now White can open up Black’s kingside with the usual g4–g5 thrust even faster.]

10.0–0–0 Bd7 [This Rauzer-like development is in fact more appropriate here. Black needs to challenge White in the centre immediately as otherwise he might get crushed on the kingside.] 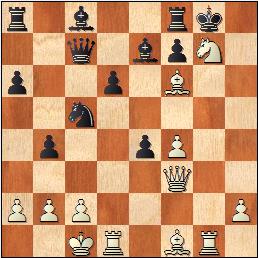 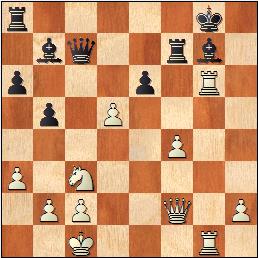 11.Bf2!? [I like this cautious move in young Karpov’s style by Komodo.]

12…b5 13.e5 [The proper reaction to Black’s previous move. For one, c6 knight has lost its foothold after b7–b5 and Nxc6 is threathening.]

[Alternatively, he could go for a Scheveningen-like maneouvre 15…Ne8 when he can defend against the battery Bd3, Qe4 with g6 and Ng7. However, White doesn’t risk much there either and probably has better attacking prospects compared to the game.] 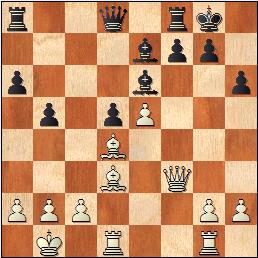 [We can sum up the opening results as favorable for White. He has achieved a better position without any risk. Black can be partly satisfied as he has avoided immediate disaster, which seems to be more or less the typical scenario in this dubiuos line (9…0–0?!)]

18…Rb8 19.g4 g6 [This prophylaxis is probably necessary in order to avoid a direct assault, for instance]

20…Rc8 21.h3 [Black’s position is passive, but quite solid – it’s not simple for White to break through – so we will witness some light maneouvering until the position clears up a bit.]

23…Kh7 24.Bd3 Rb8 25.Qg3 b4 [A controversial decision. Of course, Black is looking to get some counterplay, but generally opening up the position favors the side that holds the initiative. Strictly strategically speaking, White should be happy with this pawn exchange as in such positions he is usually the one that tries to push a2–a4 in order to create a pawn weakness on Black’s queenside (either b5 or a6). With his last move Black has done this job for him and now he always needs to be careful about the a-pawn, which could prove especially weak in all sorts of endgames.]

[It might have been more prudent for him to sit tight with a neutral move such as 25…Bh4 but then again, how many people (and engines!) would forego an opportunity to finally get some counterplay?] 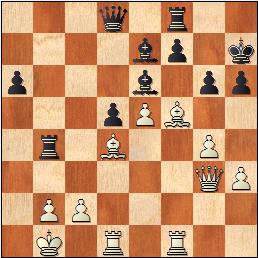 We’ve already seen this move, but in this case it is more effective. White will now play on both sides of the board so he needs to clear the third rank for his heavy pieces and create some weaknesses on the kingside. This move is perfect for both ends.]

[The alternative 28…Qxe6 seems to be playable as well. However, the queen is very passive on e6, as well as the rook on f8. The game can continue something like this 29.h4 a5 30.h5 g5 31.Qd3+ Kg8 32.Rf5 a4 33.Rdf1 with a difficult position for Black. Now any time Black moves his queen from e6, White can sacrifice the e-pawn to open up his bishop with dangerous threats to Black king. It should also be noted that 33…a3 is not dangerous due to 34.b3 and White will pick up the weak a-pawn later on.]

29.Rxf8 Qxf8 30.Qd3 Qa8 31.Rf1 Kg7 [Black succeeded in trading off its passive rook for white’s attacking one. However, white initiative still hasn’t died as he finds new ways to attack the king.] 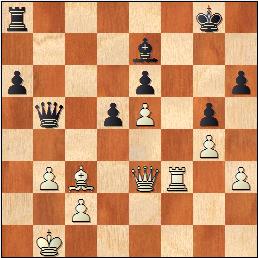 An obvious mistake, although it is less obvious that it is the losing one! Black is playing for the attack too stubbornly,]

40.Rf6! [For the second time in the game, Komodo goes for a recurring sacrificial motive. This time around, Black has to accept the sacrifice.] 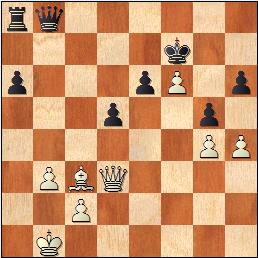 The key move! This position is very reminiscent of Carlsen-Caruana game from the Zurich chess tournament two months ago, which Carlsen won in a very nice style after sacrificing the exchange in a similar fashion. Maybe Komodo was inspired by that game? :)] 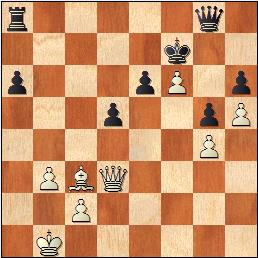 [44…Ke8 doesn’t help. White demonstrates his winning plan 45.Be5 Qf7 46.Qg6! the queen exchange is hopeless, so White continues to pick up kingside pawns, winning easily as well.; The desperado attempt 44…a5 45.Be5 a4 runs into the counterattack 46.c4! axb3 47.cxd5 and it is Black who is about to get checkmated or lose a significant amount of material.]

45.Be5 Rd7 [Basically resigning, but there was nothing better.]