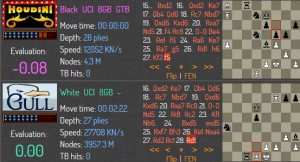 The 3086 ELO rated engine Komodo is sole leader of Stage 2 the strongest computer event TCEC. Komodo has collected 11,5/16, a full point more than Stockfish and Gull. They are followed by Rybka and Hiarcs at 10,0/16 and Houdini and Critter at 9,5/16.

The ongoing TCEC Stage 2 consists of 19 rounds and the top 10 engines move on to the next stage. Stage 3 will start immediately after. It consists of the 10 engines that qualified from Stage 2. The format for Stage 3 is a double round robin and the openings are chosen randomly per pair so that each engine will play both sides of the same opening against each other. The top 6 will move on to Stage 4 while the rest is out of TCEC for the current Season. 90 games are played in Stage 3.

So far close to mathematical qualification for Stage 3 have achieved nine engines – Komodo, Stockfish, Gull, Hiarcs, Houdini, Rybka, Critter, Bouquet, and Naum. One place is to be decided and it looks like a fierce fight between Jonny, Shredder, Junior, and Spike. Watch the live games here / Visit the official website