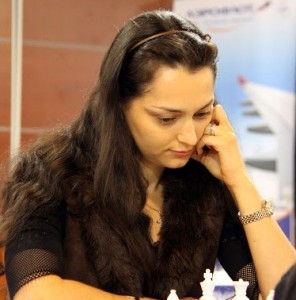 The very strong field of the 2013 Aeroflot blitz tournament has a surprising leader, the ex-women’s world champion Alexandra Kosteniuk. The Russian has scored a perfect 8/8 in her four first matches. In her last mini-match of two games, she defeated the very strong Russian GM Mikhail Kobalia. Before that she had no problems with Denis Gusev, FM Gleb Apryshko, and GM Ivan Bukavshin.

Kosteniuk is well known for being a good blitz player, winning many titles at fast chess. During her reign as World Champion, she invested a lot of time to make the faster time controls and 960 format more popular among the chess players.