The Sparkassen Chess Meeting became a two-men fight. Vladimir Kramnik and Michael Adams keep winning their games and gaining a bigger advantage over the rest of the field. Interestingly, their direct encounter will take place at the last round, where Adams will have the white pieces.

Kramnik defeated Daniel Fridman with white after showing his tactical skills in a very risky – and probably incorrect – direct attack against the king. On the other hand, Adams refuted a similar attack put forth by Arkadij Naiditsch and obtained a quick win with black.

Georg Meier and Wang Hao stand two points behind the leaders on an even score.

The most talked-about game of the day was Vladimir Kramnik’s win over Daniel Fridman. In the last couple of years, the former world champion has shown a wider set of skills in his games, as he not only obtained victories with his remarkable strategical understanding, but also using direct attacks full of tactical blows.

The game started with a Reti where white only tried to put his pieces on good squares close to his own king. When black started to look for the initiative on the queenside, Kramnik decided to advance his f-pawn to create trouble on the opposite flank. White’s f6 came as a big surprise as it involved a very speculative exchange sacrifice. Kramnik put all his pieces around the black king and Fridman was not able to find the precise defensive moves suggested by the computer. The German resigned on move 34. 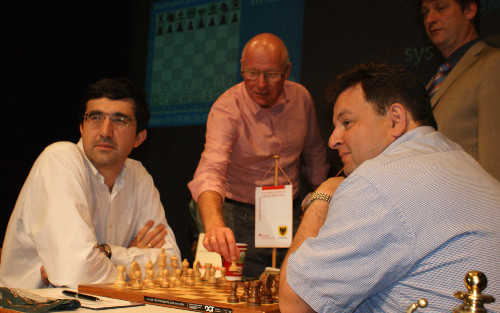 The opposite story was seen in the game that faced Arkadij Naiditsch and Michael Adams. In this case, the Englishman was the one defending against a direct attack and proving that his rival had over-reached with his all-in strategy. With his performance so far, Adams has grabbed 19 rating points and stands at the 12th place of the live list.

The game started as a regular Queen’s Gambit Declined. Adams chose solid continuations while Naiditsch lift his rook to the third file. With all his pieces pointing at the black king, the German decided to risk his pieces in a sacrificial attack. Adams brought his light-squared bishop back and defended all the threats. Naiditsch resigned on move 26 when it is clear that he will lose a decisive amount of material. 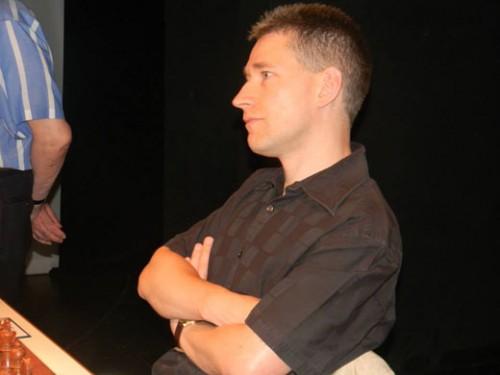 The longest game of the day was the draw between Igor Khenkin and Fabiano Caruana. The Italian is not playing up to his standards and today was the one that saved the half point. The players went into a Pirc Defense where the players exchanged a lot of mistakes. White ended up on the better side of a very complicated game, but could not convert it into a full point. The players signed the peace treaty on move 58.

Meier – Andreikin was a quick 17-moves draw, while Peter Leko and Wang Hao fought during 52 moves to achieve the same peaceful result. 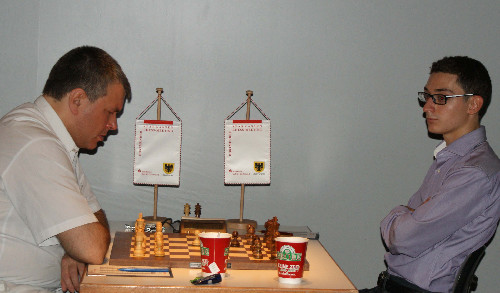