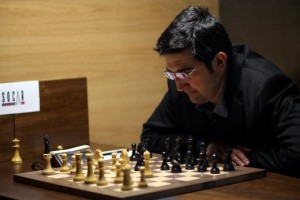 The tenth round of the Candidates Tournament is taking place in London. Magnus Carlsen arrived as the sole leader with a +3 score. Vladimir Kramnik, who is having a comeback after getting seven straight draws, defeated his compatriot Alexander Grischuk in what appeared to be a totally equal position.

Ex-world champion Vladimir Kramnik used the Defense that gave him the biggest honor in the chess world 13 years ago. He put up a Berlin Wall just as he did in his London match against Garry Kasparov. This time, he did not only achieve a comfortable draw, but instead managed to win and get closer to the leader in the standings.

Kramnik looked for ways to equalize as fast as possible in his favorite Berlin. Grischuk, who knows as good as anybody the strength of his opponent, agreed to simplify the position in order to avoid the creation of weaknesses in his camp. However, when they reached a 7v7 pawn endgame, it turned out that Grischuk was not as careful as he should have been and black got a winning position. Grischuk resigned on move 41.