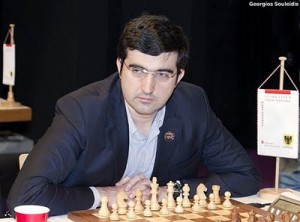 Vladimir Kramnik loves playing in Dortmund, he has won the title ten times, the most successful player of the event.

Who is number 1 in chess according to ratings? This question has not been a central topic of conversation in chess circles for years. For 73 rating lists Magnus Carlsen has dominated the FIDE rankings, with spectacular performances and convincing wins.

But for the past several months a wind of change is in the air. Carlsen’s rating has gone on a slight but steady decrease, while his opposition is making huge leaps in a race towards the top. Within 22 ELO points of Carlsen are five players, all above 2800 ELO – GM Vladimir Kramnik, GM Wesley So, GM Fabiano Caruana, GM Levon Aronian, and GM Shakhriyar Mamedyarov.

The one that will first have a shot at the number 1 spot from the chasing pack is the ex Wold Champion Vladimir Kramnik. He is just 10 ELO points behind Carlsen and he is playing an event which starts this week – the Dortmund Chess Sparkassen Meeting 2017.

Live games with analysis will be daily on Chessdom and you can follow the event on the ChessArena android application for mobile phones.

The big battle Carlsen vs Kramnik started long time ago. Exactly this clash was the basis of Carlsen winning his first World Title in India. To reach the right to challenge the throne, Magnus had to go through the Candidates tournament in London. His main opponent there was Kramnik and in the dramatic last round Kramnik had all the chances to win the event and misplayed it all in the final game.

Carlsen reached his best rating in May 2014. At that point in time the young Norwegian boasted the impressive 2882 ELO points and the question was not if anyone will overtake him, rather can Carlsen break the 2900 barrier.

In Dortmund Sparkassen Chess Meeting GM Vladimir Kramnik has the chance to regain the number 1 position in the FIDE rating list. Will he take this chance or the strong opposition from the French GM Vachier-Lagrave, the German top player Liviu-Dieter Nisipeanu, or the Chinese rock Wang Yue, can stop Kramnik’s steady walk to the top.