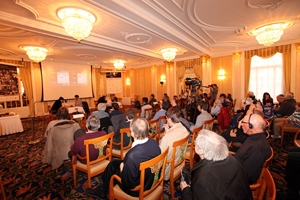 After two rounds that finished with draws on both boards, the Zurich Chess Challenge continues with two very exciting games.

Viswanathan Anand is facing his challenger from last year’s World Championship, Boris Gelfand. The Indian opened with e4 and Boris answered with his beloved Najdorf Sicilian. Vishy chose to castle kingside, but anyway pushed his pawns from that flank forward. The battle of home preparations continues between the two experienced players.

Fabiano Caruana is playing with white against Vladimir Kramnik. Following the trend of playing rare openings from his repertoire, Kramnik went for the Benoni. It is clear that he does not want to give his opponents from the Candidates the chance to take a look at his home preparation. Even though the Russian is playing openings that are not very usual for him, he is still playing rather quickly, without falling behind on the clock. After 20 moves, the game is very tense and a big fight lies ahead.