SAINT LOUIS (May 12, 2013) — In a day in which both leaders could have at least guaranteed themselves a spot in a first-place tiebreak, only one built a safety net. Round eight of the 2013 U.S. Championship and U.S. Women’s Championship saw GM Gata Kamsky slip with a complicated position but dwindling clock, while IM Irina Krush snatched a pawn and squashed the limited compensation to maintain her one-point lead.

Both events will need the final round, and perhaps more, to decide a champion.

Due to the complicated FIDE pairing system, Kamsky got white for the second round in a row. GM Timur Gareev lined up for the black pieces. Luckily, he did not assume the pairings and checked them this morning. “I was a little surprised, but you still have to play,” Gareev said. IA Franc Guadalupe confirmed the colors were accurate according to the FIDE rules, which prioritize color history and equalization more than which player is due a certain color.

Once again, Kamsky got nothing special from his preparation. “Obviously I was very happy with the opening,” Gareev said. He knew his chances would only come from active play before the game opened up. “I was looking for something concrete. Strategically white’s position is better with the two bishops. Two of my knights jumping into the center squares; I felt I should be better.”

But a few moves later, Kamsky began to think that his sluggish start would be completely flipped into a win. “Considering the way I misplayed the opening, I feel a little lucky,” Kamsky explained. “Once I got the two extra pawns, I got really excited, but I was low on time.”

The game turned when Kamsky’s queen invaded the seventh rank. “After Qe7 I knew I am in trouble,” Gareev said. He decided to burn his bridges, sacrifice all of his queenside pawns, and hunt down an otherwise safely-guarded white king. “Going into the endgame is the least desirable result. I just had to go for it, come what may.”

Kamsky got a promotion to a second queen, but Gareev forced a draw by repetition. After opening with four straight wins, Kamsky has come back to the pack by drawing the last four games.

The draw left the door ajar for a pair of players on board two to gain equal footing with Kamsky. GMs Alejandro Ramirez and Alex Onischuk each stood a half-point back going into the round, but a lifeless two-hour draw kept them both nipping at Kamsky’s heels. “Against this guy, you can’t get anything,” Ramirez said of his opponent. “Of course I didn’t want a draw with white.” Ramirez is seeking his first ever U.S. Championship (this is only his second appearance), while Onischuk is trying for his first title since 2006.

“I’m really looking forward to trying to get into the top six; that would be really exciting,” Ramirez said. He was referencing the automatic qualification spots to the 2013 World Cup, a tournament he has not played in since 2004 when he represented Costa Rica.

Joining Ramirez and Onischuk on 5.5/8 is the biggest surprise of the event. GM Conrad Holt, who is now done with all of his college course work, won again today over the fading GM Joel Benjamin. Like the other members of the chase group, Holt is very much alive unless Kamsky wins as black tomorrow.

“If only one round has to go right, it’s a real possibility,” Holt, a tournament rookie, said about his chances to win the title. “I’m having reasonably good form and not blundering too much.” He said his biggest mistake of the day was waking up too late, leaving him in time pressure before his first move. He arose at noon, leaving him only one hour to prepare and eat. “I did not go for lunch until 12:40 so I went to Qdoba because they’re the masters at blitz food preparation.” He walked up the tournament steps shortly after the opening bell. 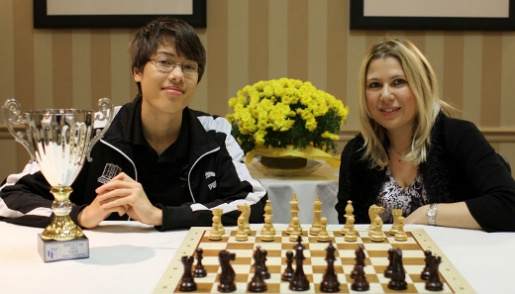 Kamsky now has 6/8 and has played all of the people who are within striking distance of him, so he will get Olympiad teammate GM Ray Robson in the final round. Robson won his fourth game today, putting him on 4.5/8 after an abysmal .5/3 start to the tournament. Like Ramirez, he said he is eyeing a spot in the World Cup. By his calculation, a win tomorrow would get him one. “Everyone’s beatable,” he said on his impending matchup with the top seed. “You have chances to get a slight edge in the opening against Gata. The problem is that he defends so well, it’s really hard to break him. But you have to try.”

The pairings are not conventional in the final round since so many players have already faced one another. Ramirez and GM Larry Christiansen will set off some fireworks on board two. Christiansen is still alive for his quest for his fourth title, though so many results have to go his way, that he evaluated his chances at 1,000-1. Gareev gets white in round nine and must win against Holt to have any chance. Of the four players who have 5.5 or six, none is playing each other.

Besides Ramirez and Robson, many other players will be vying for the handful of World Cup tickets. Kamsky has already qualified based on his rating. IM Kayden Troff said that he will be attempting to win to see if a score of 5.5/9 will be good enough for a GM norm. Unfortunately for his chances, he has the brutal pairing of black against Onischuk. FM John Bryant will likely get his first IM norm (curiously he already had two GM norms) with a win. Another quirk of the tournament – neither GM Alex Shabalov nor Christiansen, both of whom are known as swashbuckling attackers, have yet to draw a game.

In the women’s championship, almost everything hinged on today’s game between numbers one and three. WGM Tatev Abrahamyan, who has a tournament performance rating about 300 points above her expectation, had a chance to throw the women’s tournament into complete chaos today. Starting only one point behind Krush, whom she played, she took the white pieces of an Open Sicilian. Krush equalized without issue and later won, although Abrahamyan missed an important rejoinder late in the game. “I was surprised by Tatev’s decision to sacrifice the g-pawn,” Krush said. “I didn’t see the compensation. I guess we just evaluated it differently.”

Abrahamyan missed a chance to get back in the game. If 44. Qd5, after the queens trade the e-pawn and possibility of a c5 break make the position volatile. “I think it would have cost me a few years of my life if I’d seen it,” Krush said. 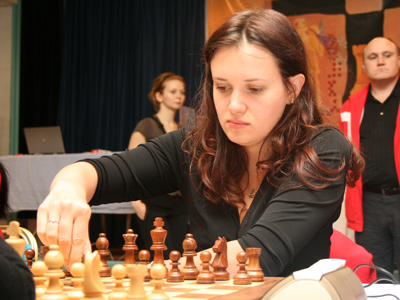 Afterward, Krush would not accept any congratulatory remarks. “Clearly a tie for first doesn’t make me happy in any way. That’s the minimum maximum.”

The win, coupled with IM Anna Zatonskih’s win, means the new second-place chaser is Zatonskih. Abrahamyan is mathematically eliminated from winning her first U.S. Women’s Championship. The only way Krush could not defend her 2012 title would be to lose in round nine and Zatonskih wins, and then also lose to her in a tiebreak on Monday. One of these two women will be the champion for the eighth year in a row.

In round nine, Krush will take white with a strong tailwind. She only needs a draw and she will face WGM Camilla Baginskaite, who is 200 points lower-rated. “There is one factor that is not going my way,” Krush said. “I’m playing someone who has nothing to lose.” Krush said this is the only situation in which she might make result-based decisions on the chess board.

Zatonskih will get white against WGM Sabina Foisor. Abrahamyan is ensured third place unless she wins and Zatonskih loses, in which case both would finish equal second.