The push and pull of the 2013 U.S. Championship and U.S. Women’s Championship continued yesterday in round five, but this time the men pulled closer to the leader, while the leading lady began to push away from the field.

GM Gata Kamsky again did not get any advantage in the beginning moves. This time it was GM Joel Benjamin who equalized and even had the slightly better chances. After simplifying into a bishop endgame, an impasse was reached and the game was agreed drawn. Afterward, Kamsky chastised himself for forgetting that Benjamin played a solid variation against the London System. “That’s kind of amazing to me,” Benjamin said about the memory lapse. “It’s the only game I ever won against him! Maybe it was a more important game to me.” The game in reference was played at the 1991 U.S. Championship. Despite the loss, Kamsky went on to win the first of his three U.S. Championships.

Benjamin now sits tied for third with 3.5/5. “I wasn’t expecting to have a 2800+ performance rating. I thought I would need a few games to warm up. I didn’t think I could have such good form; I haven’t played serious chess in so long.” His last tournament game was curiously also against Kamsky at the Washington International in August 2012. Benjamin also pointed out that he has now played the top three seeds at the U.S. Championship. The win also ends the chances of anyone winning the Fischer Prize for a perfect score. “I saved the pot, I should get a share of that money,” Benjamin joked.

Next up for Kamsky in round six will be the black pieces against the red-hot GM Alex Onischuk, who won his third game in a row by besting GM Larry Christiansen. This is Onischuk’s first three-game winning streak at the U.S. Championship since 2006, went he went on to win his first and only title. Normally reserved in demeanor, Onischuk was buoyant after his game, partially because of the manner in which he is winning. After using a rook and four passed pawns to overcome GM Alex Shabalov’s queen yesterday, he switched to an Open Sicilian pawn formation today. Onischuk is almost exclusively a 1.d4 player. “Yesterday was a crazy game,” he said. “I guess I was inspired by that. We pretty much got a Sicilian. I didn’t know it of course.” Onischuk also liked that Kamsky no longer had a perfect score. “I’m glad he drew today so he’s not hunting for this $64,000 prize. That would be truly scary.”

Besides Kamsky, Onischuk and Benjamin, the only other player that is at least +2 is the most surprising of the bunch – GM Alejandro Ramirez. After a poor showing in 2012, he said he did not have that much time to prepare for this year’s iteration. Paradoxically, that did not stop him from winning again today over the well-studied GM Sam Shankland. “Shankland is known as a very booked-up player,” Ramirez said. “So I wanted to get him out of theory as soon as possible.” Ramirez said he knew the plan was working when they were both spending five minutes on every move.

Ramirez will take black against Benjamin in round six. Unlike his opponent, Ramirez has not played the same level of competition. “I still haven’t played the big dogs yet,” he said. “Ideally I would want to play [Kamsky] because it would mean I’m having a really good tournament. But playing black would be a nightmare. Last time I played him was a massacre.” He said it was vital to get a good result in round five because Wednesday is the only day off in the competition. “There’s an aura around you that everything is wrong when you lose before the rest day.”

The last perfect score in Saint Louis is now IM Irina Krush, who won her fifth straight game and increased her lead in the women’s tournament to a full point over WGM Tatev Abrahamyan, who drew IM Anna Zatonskih today. There is no Fischer Prize for the ladies, but the manner in which she won today was reminiscent of a game Fischer won during his famed 20-game winning streak leading up to his world championship match. In their 1971 Candidates Match, GM Mark Taimanov could have ended the streak but inexplicably hung a rook in an equal position; today WFM Sarah Chiang, still winless, hung a piece to a similar two-move fork. Krush said the position was still “unpleasant” for white, even without the blunder. “I’m clearly playing for a win. The b-pawn doesn’t play,” she said. 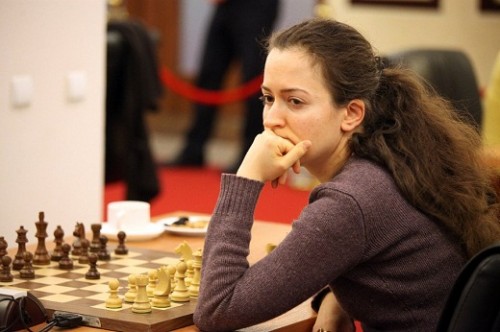 In a game that both players desperately wanted to win, Abrahamyan had a chance to keep pace but instead drew Zatonskih. Even with pawns all on one side of the board, white’s king was in the crossfire and could have been pressured more. Instead a series of trades on d3 made the game dead equal, thus pushing Krush’s lead to one point. “The fact that I missed something, it’s disappointing,” Abrahamyan said. She still controls her own destiny, which she said is critical. “It’s very important because you have to worry about your game and the results of other games. [Staying within one point] greatly increases your chances.” Looking ahead, Abrahamyan gets white against Krush in round eight.

In other games, GM Yury Shulman just barely extended his somewhat ignominious drawing streak to 13 draws, which dates back to last year. The run is the third longest in U.S. Championship history. Today GM Varuzhan Akobian had him on the ropes. With all the chances in the middlegame, and transferring to a pawn-up endgame, Akobian was frustrated he did not earn the point. The king and pawn ending is fascinatingly complex, with Black often surviving by a mere tempo. After the game Akobian speculated that advancing the lagging e-pawn to e4 cost him the win. “I don’t know why I play it,” he said. “It was the 38th move (two moves before time control). I could have just played anything and thought more.” 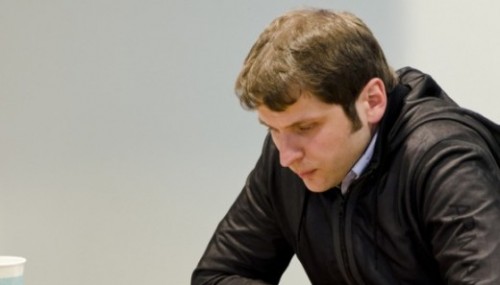 GM Ray Robson won his second game in a row by beating GM Melik Khachiyan. Robson has nowwon all four games they have played. “Sometimes after you lose to somebody a few times, you get nervous,” Robson said. After a sluggish start with .5/3, Robson has won two in a row. He has chosen to play tennis the last two mornings instead of prepare. “Some players, I don’t know why, maybe because of how they look, I don’t do well against. Why does Federer always beat Nadal?” In this regard, Robson’s selective memory and prejudice toward the Swiss star showed. Rafael Nadal is actually 19-10 lifetime against Roger Federer.