A rest day after the sixth round had changed the entire status of the Bhavarlal Khantabai Jain Multipurpose Foundation 51st Indian Premier Chess Championship, being held at Jain Hills, Jalgoan.

With both co-leaders GM Sasikiran Krishnan and GM Lalith Babu (both from Petroleum Sports Board) losing one game each in either eighth or ninth round, things turned topsy turvy.

At the end of the ninth round Lalith Babu snatched the lead with 7.5 points. Sasikiran is trailing by half a point and former under 16 world champion B Adhiban of PSPB hangs on to third place with 6.5 points. 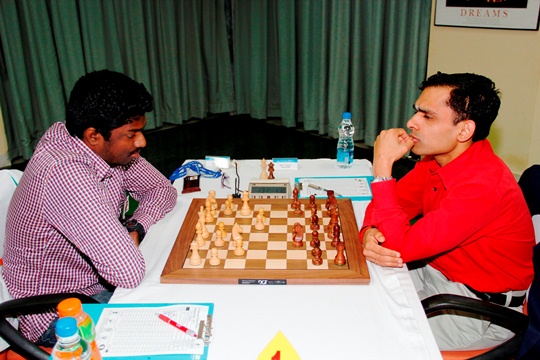 In the eighth round, IM Akshat Kamparia of Railways stunned Lalith Babu and the spectators by sacrificing his pieces at will, including his queen. In the Bogo Indian defence by Lalith, Akshat’s queen sacrifice was unexpected, but Lalith accepted it, not visualising the moves turning up later. Akshat offered a knight sacrifice, which was also accepted by his opponent. Only when Akshat came forward to donate his bishop, Lalith realised the danger of getting checkmated and resigned.

Loss by Lalith Babu helped Sasikiran to emerge leader, after eight rounds, as he drew with his game against Deepan Chakravarthy of Tamil Nadu.

But, in the ninth round, more surprises showered in, when Adhiban defeated Sasikiran in 37 moves. Sasikiran’s rook exchange for a bishop on the 15th move did not bear any fruitful result. 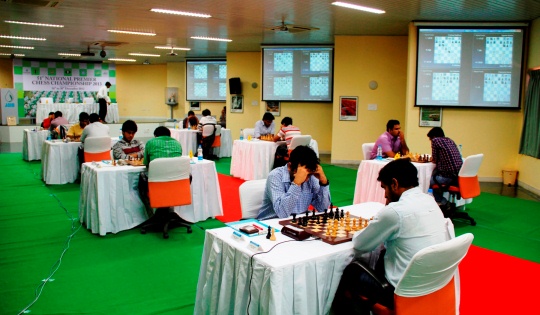 All the seven games in action

Top seeded Parimarjan Negi of PSPB suffered another loss at the hands of GM Vishnu Prasanna of Tamil Nadu, in the ninth round.

Lalith Babu earned a full point by beating Aswin Jayaram to wrest the lead. With four more rounds remaining, the tournament is interestingly poised for a good finish.