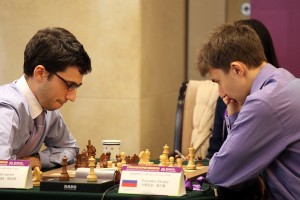 Laurent Fressinet in the final round of SportAccord Mind Games

The rapid sections of the SportAccord Mind Games came to a dramatic end in Beijing, China.

The men section winner of 2012 is Laurent Fressinet who edged out Hikaru Nakamura on better tiebreak score. Nakamura entered the day as sole leader, but right in the first game Fressinet defeated him with black and took the lead. Nakamura quickly recovered and equalized Fressinet in the standings in round 6 by beating Grischuk. A strong final sprint by both players where Nakamura beat Morozevich and Fressinet beat Karjakin, left both with equal 5,5/7, but saw the French Grandmaster lift the title on better tiebreak. The bronze medal was awarded to Alexander Grischuk, who finished with the same points as Ding Liren, but also had better tiebreak.

Scroll down for the full standings and results of all rounds.

In the women section of the SportAccord Mind Games the story was even more complicated. The sole leader of yesterday Yifan Hou had a rough start after a draw with Antoaneta Stefanova and a loss to Elizabeth Paehtz. A final round, where all games finished with decisive results, left four players equal at the top of the standings – Yifan Hou, Kateryna Lahno, Humpy Koneru, and Anna Muzychuk. The tiebreak rules awarded the title to Kateryna Lahno, second place to Yifan Hou, third place for Humpy Koneru, while the short staw was for Anna Muzychuk who finished without a medal.

Scroll down for the full standings and results of all rounds. 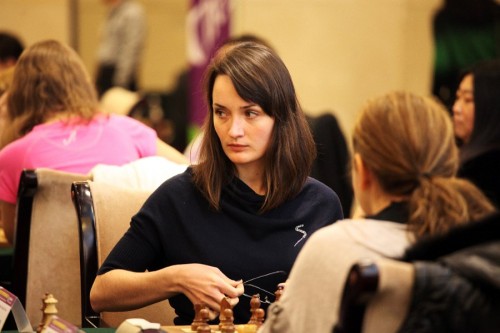