The fifth-seeded Howell, the highest-rated player among the joint leaders, gradually outplayed Turkey’s GM Emre Can in an English opening en route to his third consecutive win. Can’s weak b7-pawn was the main discussion point of the game, with Howell’s two rooks bearing down on the half-open b-file and his g2-bishop controlling the diagonal. The 30th-seed Turkish grandmaster tried to organise a counterattack with a pawn storm against the white king, but Howell’s queenside initiative was already decisive and Can promptly resigned following a straightforward tactical shot on move 30. 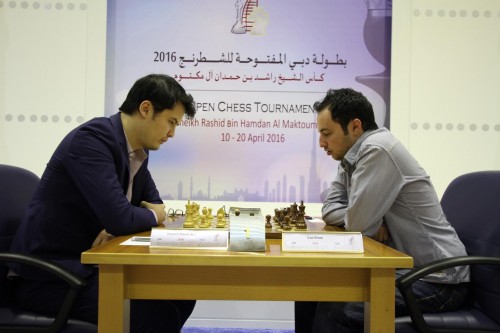 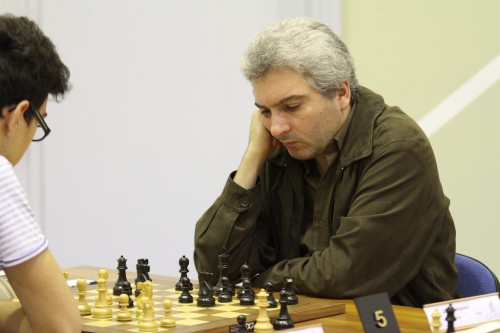 Sokolov, playing black against Indian GM Deepan Chakkravarthy’s Giuoco Piano, was locked in a complicated encounter with four minor pieces and a rook on each side. After sacrificing a pawn for the initiative, Sokolov managed to create a dangerous passer on the d-file. Feeling the pressure, the Indian finally tripped up on the 35th move, allowing Sokolov to win the exchange, which he handily converted after 45 moves.

The 33rd-seed Gopal scored the round’s biggest upset when took down sixth-seeded Georgian GM Baadur Jobava after an electrifying tactical slugfest. Jobava, playing the Pirc Defence, threw down the gauntlet when he allowed Gopal to capture his g6-pawn with a knight, unleashing a maelstrom of complications that was impossible to navigate over the board. When the dust cleared, Gopal had given up two minor pieces for a rook and two pawns, but more importantly, black’s lack of coordination and severely weakened kingside allowed Gopal to launch a second wave of attack and force resignation on the 48thmove.

Employing the King’s Indian Defence, the UAE’s GM Salem AR Saleh failed to join the leaders when he was derailed with a draw after missing plenty of chances to win in the endgame against India’s IM Karthikeyan P. Saleh’s greedy pawn capture on the 56th move – instead of pushing his passed pawn to the f2-square – gave the Indian time to activate his rook and king and later escape with a perpetual check. In other UAE results, Fide Master (FM) Saeed Ishaq defeated India’s Jijo Joy, Candidate Master (CM) Nagueb Saleh drew with the Philippines’ IM Haridas Pascua and FM Nabil Saleh lost to 15th-seed Ukrainian GM Yuriy Kuzubov. 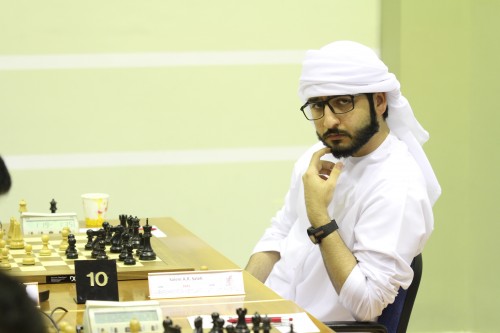 Meanwhile, registration for the Dubai Open Blitz Cup will end tonight. The side event will be held on the rest day on Friday (April 15). The 11-round Swiss system blitz tournament offers a total prize fund of US$4,000. Time control is three minutes plus a two-second increment for each move. The deadline for registration is on Thursday evening.