The 24th European Youth Chess Championship 2014 is afoot in Georgian coastal town Batumi. After 5 rounds we already have the leaders in their age groups.

Turkish player Uzumcu Ahmet Utku is in the sole lead with maximum score in the group U10, while in the youngest Open group Russian Ilya Makoveev leads also with the perfect score. 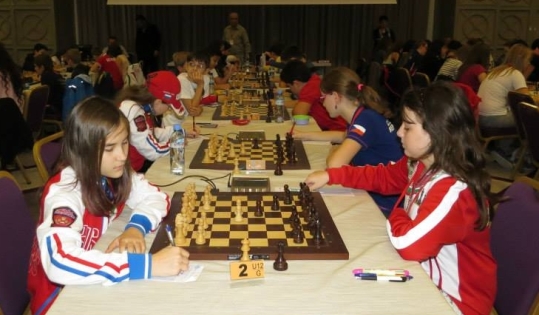 In the oldest Girls section U18 WFM Ulviyya Fataliyeva is the only player with maximum score after 5 rounds. Three players lead in the group U16 with 4.5 points: Irina Drogovoz (RUS), Mai Narva (EST) and Ghukasyan Siranush (ARM).

Greek WFM Anastasia Avramidou is in the sole elad in the group U14 with maximum score, while in the younger age group U12 three players tie for the first place with 4.5 points – Ekaterina Goltseva (RUS), Zuzana Gresova (CZE) and WFM Nurgyul Salimova (BUL).

U12 Romanian Lehaci Miruna-Daria tops with perfect score, and Russian Olga Melenchuk leads in the youngest group with 5/5.

Half of the tournament is over, and the competition is getting more interesting towards the end.