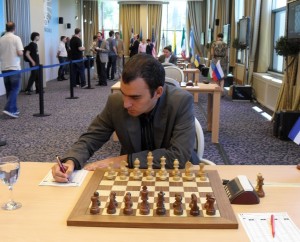 Leinier Dominguez outplayed Veselin Topalov in the longest game of the day to overtake Gata Kamsky and claim a clear first place in the Thessaloniki Grand Prix. The Cuban finished the tournament with 8/11 points.

In the other key encounter Fabiano Caruana made a good favor for Dominguez by defeating the overnight leader Kamsky to finally catch him on the shared second place.

Hikaru Nakamura won against Peter Svidler to finish the tournament in good mood, while Vassily Ivanchuk scored his first victory in the game against Etienne Bacrot.

The next Grand Prix is going to take place in Beijing

White employed the English Attack in the Naidorf Sicilian and the play followed an earlier encounter between Leko and Grischuk in London Grand Prix.

At one point Kasimdzhanov deviated from Leko’s game with the more ambitious 18.Rh8. However, two moves later he refrained from the consistent 20.fxe4 and played the safer 20.Qxe4. Kasimdzhanov said that this has been a very difficult tournament and he was not very ambitious today.

Grischuk added that he had to go down the forced line after 10…b4 because otherwise he would simply be worse.

Kasimdzhanov concluded that the tournament was very nice, his result is okay, but he wasn’t happy about the two games with white pieces that he lost (to Dominguez and Kamsky).

Grischuk declared that “Leko is history, we officially have a new king of draws – Drawschuk.” He provided statistics to back the claim (London Grand Prix and Candidates, Thessaloniki, Kazan). It is not that he wasn’t trying, but he couldn’t convert many winning positions and he also saved some difficult games. 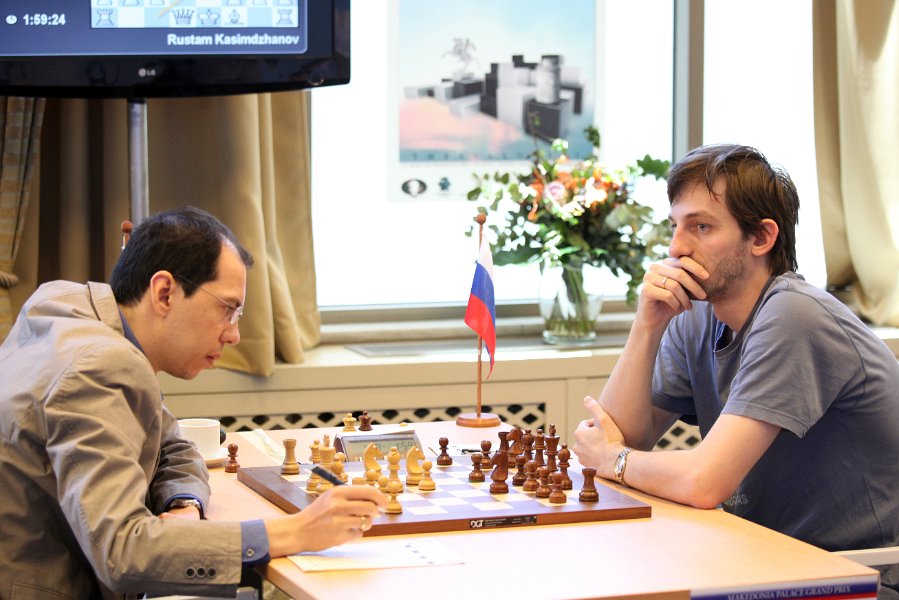 The game started as a typical Anti-Marshall in the Ruy Lopez. Caruana was very nervous before the game and he wasn’t sure about what approach to take. He wanted to start safe and see what happens later.

White was pleased with 17.c4, which temporarily locks the pawn structure, but can be followed with b2-b4 and some pressure on the queenside.

The game proceeded with maneuvers from both sides seeking the best ways to release the tension. Caruana thought that after 25.Rf1 black became uncomfortable because of the weakened King’s position. 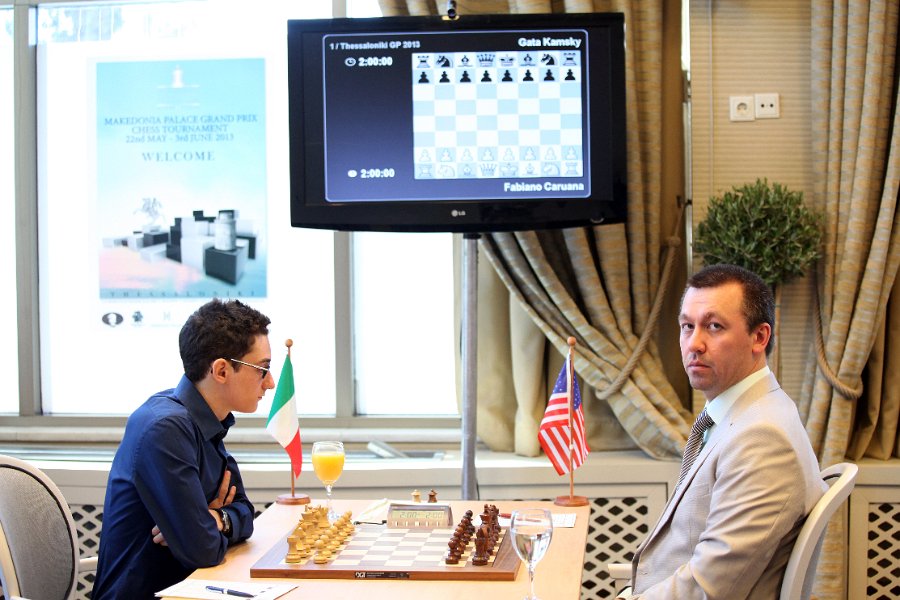 Ivanchuk defended with the Gruenfeld Indian defence but he wasn’t entirely happy with his play, actually he said that “the position looks terrible for black”.

White rushed to push d5, but Ivanchuk feels that this gave him a chance to come back into the game. The Ukrainian said that with 18.Rec1 Rc8 19.Rxc8 Qxc8 20.Rc1 Qd8 21.Qa3 white retains big advantage.

Another mistake followed, according to Ivanchuk, as white played 19.Ne5, after which “…at least black is not losing by force”. Black used the chance to attack the center with 19…e6.

Ivanchuk said that 22.Bg5 was a strange decision, but maybe white wanted to repeat the moves with 22…Bf6 23.Bh6 Bg7 etc. He thought for awhile and found 22…f6 as a best way to fight on.

After this error black assumed clear advantage and proceeded to win the game with a nice tactical combination.

Ivanchuk also showed the improvements for the yesterday’s game with Nakamura. He came up with the winning moves while swimming in the pool.

In conclusion, Ivanchuk said – “The hotel and organization were very nice, but my play…(facepalms)” 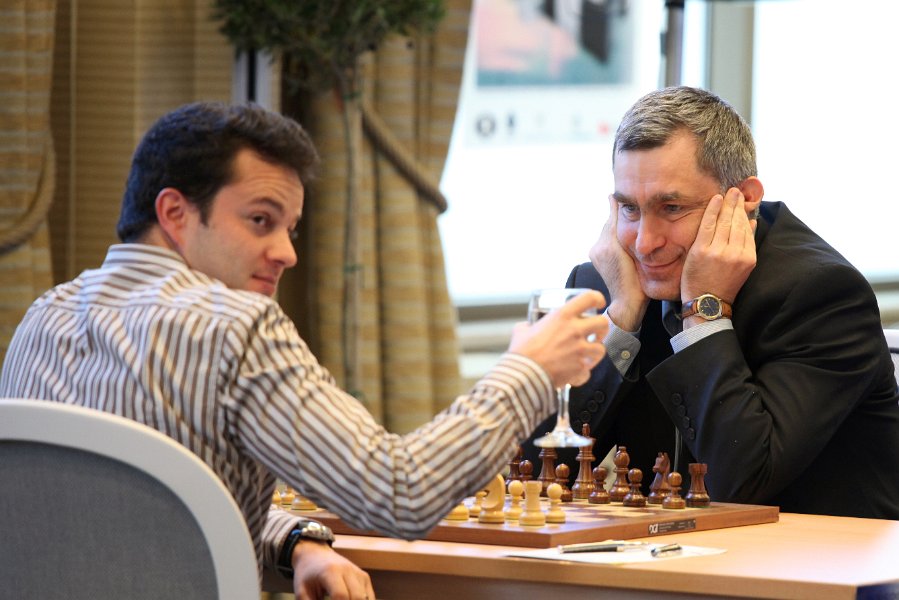 Morozevich surprised the opponent with the Trompowsky attack aiming for the pawn structure resembling his favourite Chigorin defence with reversed colors.

Ponomariov said that he wasn’t aware of an earlier game between Morozevich and Leko that had the similar opening.

White tried to sacrifice a pawn and organize attack on the opposite castle, bu black defended precisely and was able to trade down to an equal endgame. 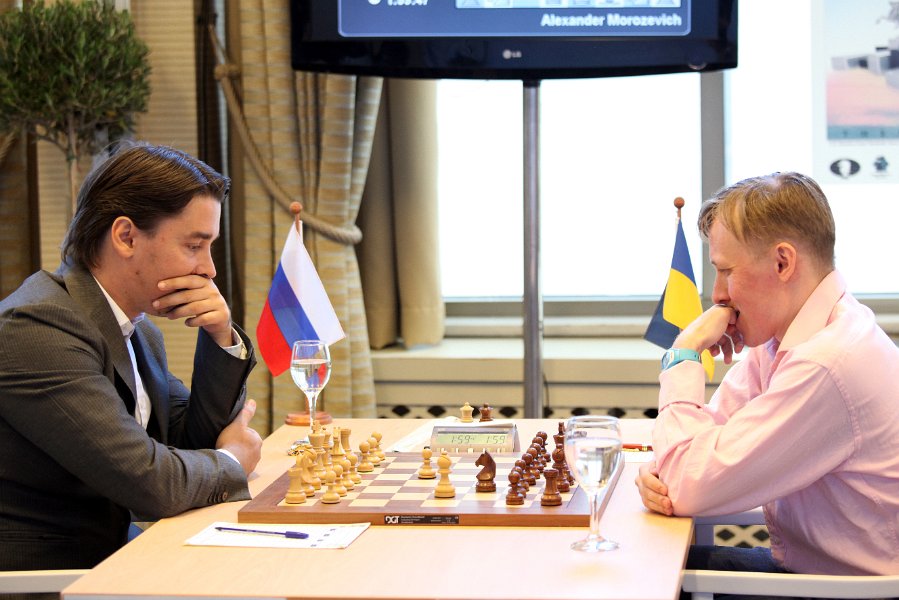 Nakamura opened with 1.c4 but Svidler was well prepared for an open fight. Nakamura lamented later at the press conference – “Every time I get surprised in the opening and every time I react poorly.”

17…Qh5 was another good move by Svidler, when white expected only 17…Nf5 and exchange of the Queens.

Svidler thought he would be winning had he played 27…Ra4, but Nakamura wasn’t so sure, in any case the American admitted that black is definitely better.

With 46…Kg7 47.Bc3 Rc5 48.e6+ Rxc3+ 49.Kxc3 fxe6 the game would probably be a draw, but Svidler played the double-edged 46…g5 after which white also gets winning chances in the complicated endgame.

Svidler missed 48.Bc3 and immediately made a mistake with 48…Kg7. White used the back-rank tactics to promote the pawn.

In conclusion Nakamura said: “I thought the organization and location were great, I really enjoyed everything in the tournament. It is very impressive that they put it together in such a short notice.”

“As for the play, I got a bit tired of chess, but today I won, so this gives me motivation to keep on playing and next week I have Tal Memorial. 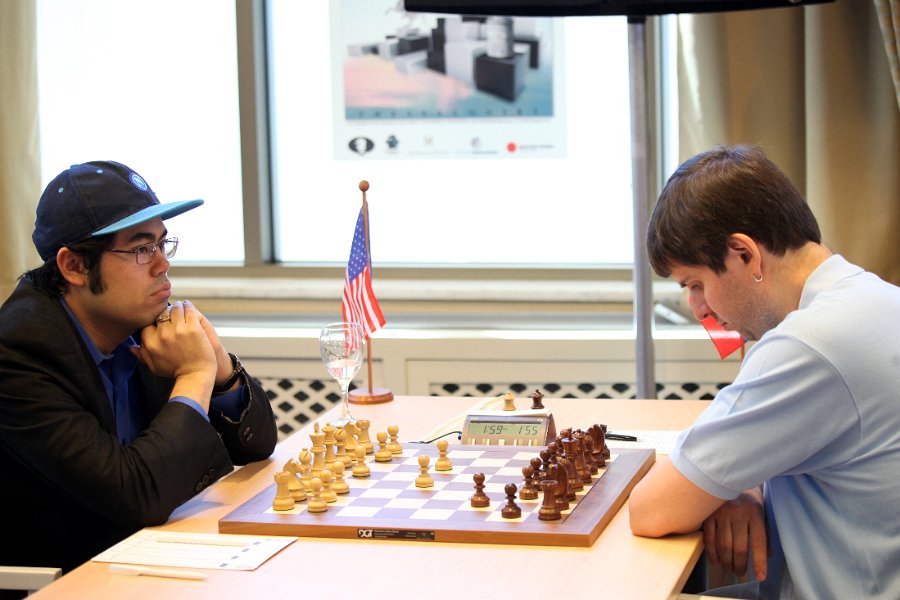 Topalov surprised his opponent, and probably everyone else watching the game, with the Sicilian Taimanov defence. However, it shouldn’t be forgotten that this line was played and deeply analysed by many Bulgarian masters.

The Cuban was spending time to choose the setup most optimal for the tournament situation, while black was blitzing his moves confidently.

White decided to exchange the Queens, but this has given enough time for black to organize the better version of the Classical French pawn structure.

Topalov deployed his pieces to best possible squares and started pushing the queenside pawns. Meanwhile, white was struggling to introduce his forces into the play.

But as the light-squared Bishops left the board, white was able to catch a breath. With further exchanges white managed to reach a slightly better Rook endgame with the same number of pawns but also with one passer on the queenside.

With perfect play, the endgame should be drawn, but GM Papaioannou quickly pointed that he wouldn’t like to defend black’s side in a practical game. Black had to endure a long and patient defence and to find many precise moves.

Topalov played very well (56…Rg2 was an excellent defence), but in the key moment he missed a more active defence with 58…Rg4, when it is not clear how could white make a progress.

Dominguz finally clinched a victory and clear first place in the tournament.

Dominguz finally clinched a victory, clear first place, 25000 EUR prize and 170 Grand Prix points. He said in the press conference that he was supported by his father, who was present in Thessaloniki, and that he didn’t have helpers for preparation.

In fact, for whole two days he was without the computer, which broke down, and he couldn’t even prepare for the games against Kasimdzhanov and Nakamura.

Tournament commentator FM Logothetis said that this was probably the greatest success for Cuban chess since the times of Capablanca, and Dominguez agreed. 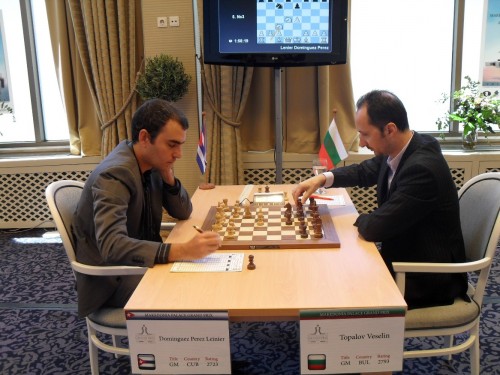