By by WGM Tatev Abrahamyan

The second leg of the 2016 Grand Chess Tour began in Leuven, Belgium on June 17, after a four-day break from the Paris event. The field was even stronger as the five-time world champion Viswanathan Anand replaced the Parisian wildcard, Laurent Fressinet. After 5 rounds of play, Anand emerges as the leader proving that even as the oldest player in the event, he is still one of the best rapid players in the world. Going into the tournament, it was expected that the top two finishers of the Paris leg of the Grand Chess Tour, Hikaru Nakamura and Magnus Carlsen, would once again be fighting for the top places. However, after many blunders and inaccuracies, both players ended the day on the bottom half of the standings. 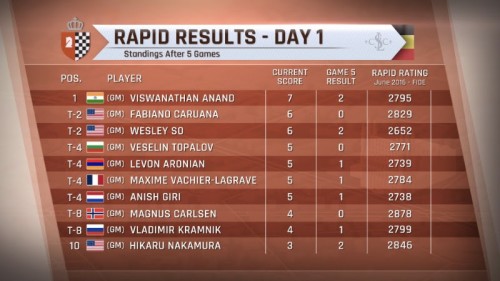 The day started off with a brilliancy by Vishy Anand, as he played a tactical masterpiece against Maxime Vachier-Lagrave. In the postgame interview, Anand whizzed through the variations, leaving the commentators speechless with his ability to calculate complicated variations precisely and deeply with little time on the clock. Trouble started early for the tournament leader as he got outplayed in a rook endgame against Vladimir Kramnik, who is known for his great technique. Unfortunately for the American, this was only beginning of his struggles. Fabiano Caruana continued his streak of good results by sacrificing a rook against Veselin Topalov and defeating him in a nice fashion. Levon Aronian beat Anish Giri in a rook endgame, where the Dutchman erred in a later part of the game during mutual time trouble. The only peaceful result came from the world champion who drew the American Wesley So. 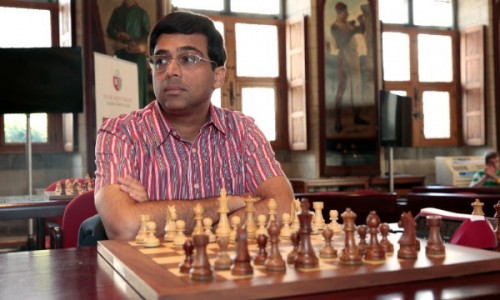 The round was quite uneventful, except for two games. First, Anish Giri won the exchange against Fabiano Caruana with a nice tactic, but wasn’t able to convert and drew. For a player of that caliber a draw in that position is a very upsetting result. Next, was the wild game between Topalov and Nakamura. The American played energetically, pressing for almost the entire game but one mistake allowed his opponent’s pieces to get in the game and capitalize on the blunder that followed. Carlsen and Vachier-Lagrave played a very unusual game, where Magnus decided to ignore all the principles of the openings that chess players are taught as beginners but the game eventually sizzled down to a drawn endgame. Anand vs Aronian and So vs Kramnik were uneventful draws. 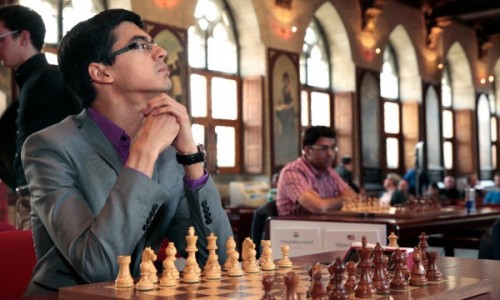 The surprise of the round was Vishy Anand blundering a piece on move 8! The spectators and the commentators were even more shocked when Caruana failed to convert the rare gift top players receive and only drew the game. When asked about the confidence and the speed of play he demonstrated after the blunder, Anand joked that it is easier to calculate after losing pieces. Nakamura wasn’t able to stop the bleeding, as he followed in Carlsen’s footsteps and ignored all the basic principles of the opening, but unlike the world champion, his king wasn’t able to survive Anish Giri’s powerful attack. Nakamura had to give up material to survive the attack and resigned shortly after. Topalov proved that he’s able to put a bad result behind him as he defeated his longtime rival, Vladimir Kramnik. The two men don’t have the best relationship ever since their 2006 world championship match, so the one move piece blunder must have been even more painful for the former world champion. Carlsen found himself tied for first place after defeating former world number two Levon Aronian. The only draw was between Vachier-Lagrave and Wesley So.

Magnus Carlsen had a winning advantage against Fabiano Caruana, but fell for a one move tactic and was no longer able to save the game. It is interesting as Carlsen rarely falls simple tricks and Caruana rarely wins games by coming back from worse positions. Vladimir Kramnik wasn’t able to come back from a bad result and blundered a piece yet again, this time against Maxime Vachier-Lagrave. Nakamura was finally able to stop the damage, as he drew against Vishy Anand without much turbulence. So vs. Aronian and Giri vs. Topalov were also drawn. Topalov fans must have been happy to see their favorite player finally show his true abilities and regain his form.

No one could have predicted what happened in this round. Nakamura was facing his longtime rival Carlsen and was hoping to finally rid himself of the “Carlsen curse”. After 11 moves of chess, Carlsen blundered a piece in such an elementary way that his heartbreak and disappointment could have been felt through the computer screen. Carlsen just sat there with his face covered, played couple more moves and resigned gracefully. When the game was over, Nakamura had more time on his clock than what he started with! Wesley So quietly moved up the ladder by beating his compatriot Caruana and sharing the second place with him. Anand took the lead in the first half of the rapid by defeating Topalov in an interesting endgame, where the Bulgarian’s rook got trapped in the middle of the board. Aronian vs Vachier-Lagrave and Kramnik vs. Giri ended in a draw.

If day one of Leuven could be described in one chess phrase, it would be “blunderfest”. After the high level of chess in the rapid portion of the Paris Grand Chess Tour, the fans were excited to soak in more instructive chess games and continue watching the race between Nakamura and Carlsen. Nothing went as planned for these two top players, but it is always exciting to see players like Caruana and Topalov who struggled in Paris to be making a comeback, not to mention the several high level games that the tournament leader Vishy Anand produced. The chess world waits in anticipation for the second day of the rapid to see if the veteran of the tournament will prevail and whether Carlsen and Nakamura will be able to turn the tables in their favor.

All the information is available on www.grandchesstour.org. Live commentary by Grandmasters Yasser Seirawan, Eric Hansen, and Woman Grandmaster Jennifer Shahade streaming from the Chess Club and Scholastic Center of Saint Louis with Grandmasters Maurice Ashley and Alejandro Ramirez reporting directly from Leuven begins at 7 A.M. Central Time and can be viewed on www.dailymotion.com/GrandChessTourOfficial