The fourth leg of the Grand Chess Tour wrapped up in Saint Louis with Levon Aronian dominating the field.

He won the tournament with two rounds to spare and three points ahead of his closest rivals, Sergey Karjakin and Hikaru Nakamura. He collected $37,500 and 13 GCT points and is now in third place overall in the tour standings.

The rapid and blitz portion of the tour are officially over and the last stop will be in London in December where the winner of the entire tour will be determined. 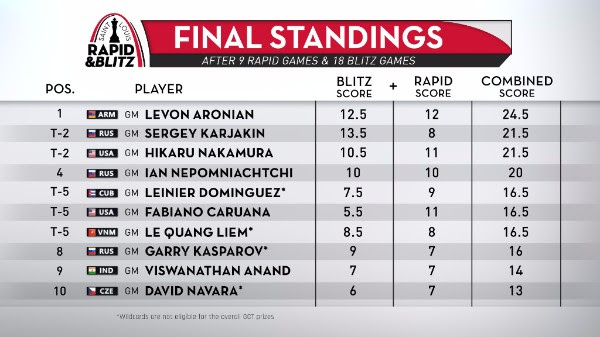 Levon Aronian started the day off slowly by drawing Hikaru Nakamura quickly and then losing to David Navara in the very next game.
This allowed Sergey Karjakin to close the gap to one point, making the race tighter. However, Aronian had a strong showing for the rest of the day, winning four games and drawing three.

His closest competitors were not able to keep up with his powerful play. In the postgame interview, while reflecting on Karjakin’s 8/9 performance yesterday, he joked that he knew that eventually luck would favor him and he would win the event.

As he explained, luck in chess means that sometimes chess players take risks and end up in losing positions and luck is whatever happens in those positions. He was referring to his game against Quang Liem Le today in particular, as his opponent flagged in a much better position.

Of course, it was his superb play and creativity that allowed him to win this prestigious event.

Hikaru Nakamura was the one chasing Aronian by two points before the start of the day but was not able to keep pace with the eventual champion. After their quick draw, Nakamura went on to lose three games in the next four rounds.

He did recover by scoring 3.5/4, including a win over his compatriot Fabiano Caruana, but this was only enough for a tie for second place with Sergey Karjakin.

Sergey Karjakin had one of the most phenomenal results yesterday by scoring 8/9. Had he been able to show the same result today, the tournament would have been his. He started the day by defeating none other than Garry Kasparov and then Leinier Dominguez.

However, repeating his result from yesterday was almost an impossible task and he too lost to David Navara then later on to Hikaru Nakamura, with whom he shared second and third places with.

Ian Nepomniachtchi started and ended the day in fourth place. His notable wins were against Dominguez and Caruana, while he drew Kasparov and Karjakin.

Fabiano Caruana had a horrendous day by scoring 2/9. He beat Viswanathan Anand and David Navara and lost the rest of his games. He tied for fifth place with Leinier Dominguez, who scored 4.5/9. Dominguez beat the two Americans, Caruana and Nakamura, as well as Anand.

Quang Liem Le had a good start with wins over Caruana and Nakamura, but his three draws in the middle of the tournament and the two losses in the last two rounds only allowed him to finish tied with Caruana and Dominguez.

Garry Kasparov lost his first game to Karjakin but scored 5.5 points in the remaining of the games. He defeated Dominguez, Nakamura and Caruana and drew the rest of the field, finishing in 8th place.

Unfortunately, this is the last tournament he intended to play as he expressed no interest in playing any other events in the future.

The other legendary player of the tournament, Viswanathan Anand, finished in 9th place after only scoring 3.5 points today. His only win was against Nepomniachtchi.

David Navara finished in last place but he did have a big effect on the standings as he defeated both Aronian and Karjakin.