The European Football Championship 2012 has attracted millions of fans in front of the TV screens making it the top competition of the month. But if we have to name other sports that attract large attention, this month chess should be certainly among the most viewed.

With the start of Tal Memorial 2012, close to 100 000 people followed the chess news and games on Chessdom.com during the first day. This number is expected to grow in the weekend, as it will be very active and full of top live competitions.

Here is a preview of the weekend events for your chess calendar. 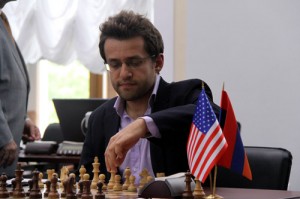 Tal Memorial 2012
With four decisive games in round 1, Tal Memorial 2012 is off to a great start. Rounds 2 and 3 will be commented live on Chessdom by GM Grzegorz Gajewski and GM Csaba Balogh.

Topalov – Vallejo
Topalov and Vallejo are the headliner of the celebration of 25 years Leon Chess Tournament. After Vallejo took the lead in R2, it is Topalov’s turn to show if he can go for the win in the match.
Live game R3 here at 16:30 CET and live game R4 here at 18:30 CET

Spanish and Latin America competitions
Spain is having the top match Vallejo – Topalov, but that certainly is not the only event going on in the country now. Latin America is also active in the season of youth events, but there is also the strong Kuña Arandu with 10 of the top continental GMs.

All events live and with detailed news at Ajedrez Chessdom

And more from CEWN

And if all this is not enough for a weekend chess fun, the CEWN weekly chess magazine is out with 34 pages of the most fresh opening studies, endgame tactics section, puzzles, and commented games including the classic Polgres – Lasker, and the recent shows from the matches Le Quang Liem – Navara, Bauer, Naiditsch, Schlosser, and Wesley So . All coming in pdf and pgn to your mailbox, you can subscribe and get your copy here (1 year includes 52 issues, each for less than 0,70 cents).